Erdogan Wins Another Term As Turkey's President With Expanded Powers 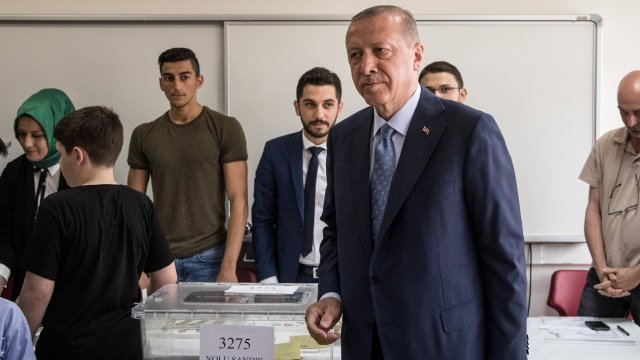 SMS
Erdogan Wins Another Term As Turkey's President With Expanded Powers
By Ethan Weston
By Ethan Weston
June 25, 2018
Recep Tayyip Erdoğan is the Republic of Turkey's longest-serving leader since it was founded in 1923.
SHOW TRANSCRIPT

Turkey's President Recep Tayyip Erdoğan has won re-election, according to the country's election board.

The head of the board made the announcement Monday after 97.7 percent of the votes had been counted. Erdoğan is the country's longest-serving leader since the Republic of Turkey was founded in 1923.

The election was supposed to take place in November 2019, but Erdoğan moved it up earlier this year. The move caught opposition off-guard and ensured the election would take place while the economy was strong. It's been showing signs of weakening.

Erdoğan will be the first president under a new power system voters chose last year. The new model does away with the prime minister and vests more powers in the president.