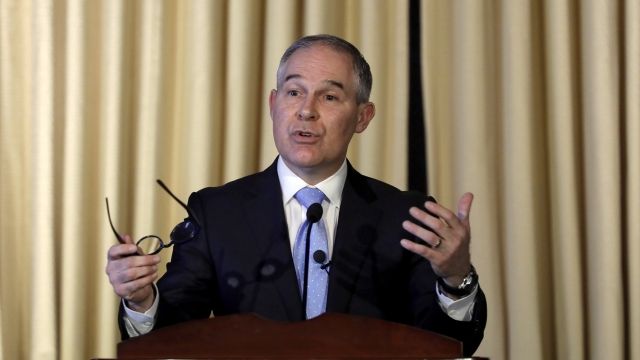 In 2015, the U.S. agreed to the landmark climate treaty known as the Paris Agreement. Signed by 143 countries, it aimed to limit worldwide temperature increase.

"It's something we need to exit, in my opinion. It's a bad deal for America. It was an America second, third or fourth kind of approach. China and India had no obligations under the agreement until 2030," Pruitt said on "Fox & Friends."

That reasoning is misleading. China and India have emissions goals that they're supposed to hit by 2030. They're already working toward the goals, since they can't just make the emissions disappear overnight.

And the agreement requires China and India to cut a higher percentage of their emissions than the U.S.

It may seem counterintuitive that the head of an environmental agency wants out of an agreement to protect the environment, but this is in line with President Trump's campaign vision to increase energy jobs.

The agreement went into effect just before Election Day. Other countries have urged the U.S. to keep its promises, but there aren't really any penalties for backing out.

That doesn't mean it's a done deal, though. Trump's team will reportedly meet to discuss whether to exit the Paris Agreement. They're expected to decide before a G-7 summit in late May.