Proposed EPA Rule Would Ban Certain Research From Use In Policymaking 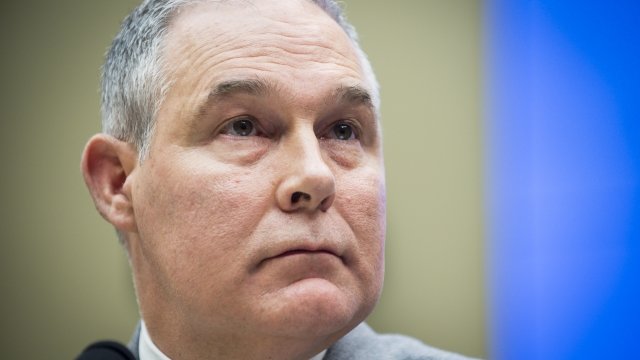 SMS
Proposed EPA Rule Would Ban Certain Research From Use In Policymaking
By Jake Jones
By Jake Jones
April 24, 2018
EPA head Scott Pruitt said such a rule would increase the agency's transparency, but critics say it could ban valuable data from consideration.
SHOW TRANSCRIPT

A proposed rule would limit the scientific research the Environmental Protection Agency can use when drafting policies.

EPA head Scott Pruitt signed off on the proposed rule Tuesday. The rule would make it so the agency could only make policy decisions based on research and data that are publicly available. The goal, Pruitt said, is to let the public see the information behind EPA policies and encourage more peer reviews.

But there's a catch: Some scientific studies include sensitive personal information about participants. Critics say Pruitt's new standards would mean those studies, as well as older studies with data sets that haven't been maintained or published in an updated format, would be off-limits to EPA policymakers.

The Environmental Protection Network, which is made up of former EPA employees, and the Union of Concerned Scientists publicly opposed the new measure.

The new rule could also be at risk of a legal challenge. The D.C. appellate court has ruled unanimously — twice — that the EPA wasn't required to publicize data behind its regulations.

The proposed rule will have a 30-day public comment period before a final decision is made.