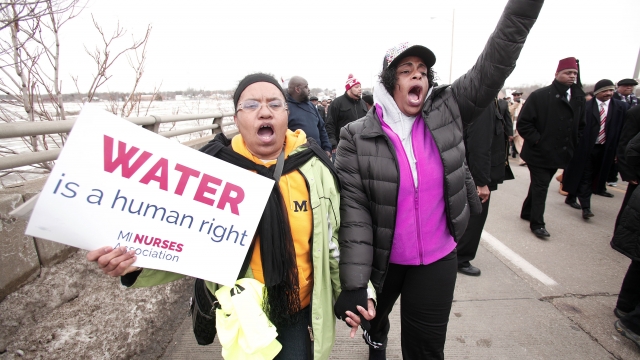 SMS
Judge Rules EPA Can Be Sued For Its Response To Flint Water Crisis
By Ahmed Jawadi
By Ahmed Jawadi
April 19, 2019
​Nearly 3,000 Flint residents sued the EPA in 2017, saying the agency officials "negligently responded to the water crisis."
SHOW TRANSCRIPT

A federal judge ruled Thursday residents of Flint, Mich. can sue the U.S. government over its response to the city's water crisis.

Nearly 3,000 Flint residents sued the Environmental Protection Agency in 2017, saying agency officials "negligently responded to the water crisis, including by failing to utilize the agency's enforcement authority under the Safe Drinking Water Act to intervene, investigate, obtain compliance, and warn Flint residents of the health risks posed by the water."

In response, the federal government filed motions to dismiss the suit, arguing the EPA should be exempt because state law would not hold private individuals liable in similar circumstances.

But after reviewing the suit, the judge said that although public water systems are typically the responsibility of the state, Congress has "expressly directed the EPA to intervene under specified conditions." And in this case, she said the EPA knew "the Flint River was highly corrosive and posed a significant danger of lead leaching out of the city’s lead-based service lines," and that state and city officials were not warning Flint’s residents that they're water was laced with lead.

The judge's ruling means the plaintiffs can move forward with their suit. However, she did not rule on whether EPA employees were negligent in addressing Flint’s contaminated water.