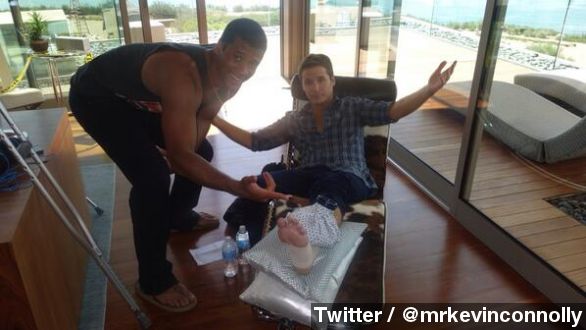 By Matt Moreno
March 25, 2014
Actor Kevin Connolly broke his leg in two places on the set of the new "Entourage" movie. He was playing football with Seahawks' QB Russell Wilson.
SHOW TRANSCRIPT

"The actor broke his leg in two places playing football on the set of the new 'Entourage' movie in Miami. The only upside, if there is one, is he was playing with Super Bowl winning Seattle Seahawks quarterback Russell Wilson."

Okay, so it wasn't exactly Wilson's fault. Connolly posted this photo to Twitter Friday, showing Wilson helping him ice his leg on the set of the new "Entourage" movie.

TMZ says it happened when Connolly was going out for a pass and tripped on a sprinkler head. That resulted in co-star Jerry Ferrara falling on Connolly's leg.

But, Eric Murphy is tough man. Not even a broken leg is going to stop him.

The 40-year-old actor reportedly got back to filming the next day with absolutely no delay. Playing through pain! There's no word yet on if they'll add the injury into the script. (Via HBO / "Entourage")

And Connolly seems to be in high spirits throughout it all.

He tweeted out that he was happy to make ESPN's Top 3 Stars of the Night the other day.

"Connolly is my star because he wanted to keep filming. Doctor couldn't even believe he could walk on it!"

And Russell Wilson had some fun with it too, posting this to Instagram: "My man @kconnolly88 banged up after Running a perfect post route. When he gets healthy watch out Wes Welker! #ARealHeartGuy #WhiteLightning"

And "Entourage" director Doug Ellin tweeted this, making sure everyone knew Connolly came down with the catch.

It looks like Connolly will tough it out to film the rest of the "Entourage" movie, which currently is set to release in June 2015. But, anchors at WTXF feared this could've been worse.

"Can you imagine if it was Russell Wilson who tripped and someone fell on him?"

"Oh my goodness. Seahawks would've been really mad."  (Via WTXF)