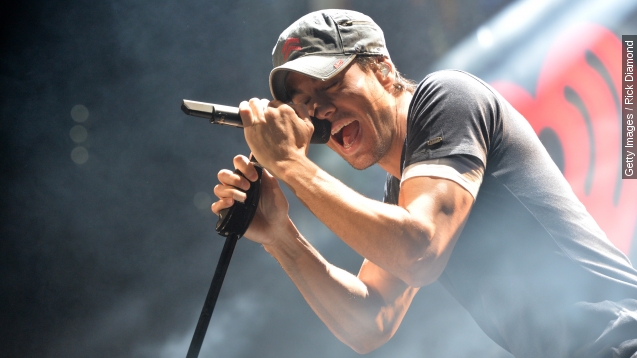 The incident happened after Iglesias attempted to turn on a camera drone, which then may have sliced his hand during his concert in Tijuana, Mexico. (Video via Republic Records / Enrique Iglesias)

A spokesperson for Iglesias told People, "During the show a drone is used to get crowd shots and some nights Enrique grabs the drone to give the audience a Point of View shot."

While it was never reported what specifically happened, it's easy to see how Iglesias could have cut himself on the drone. There are many sharp parts. (Video via The Verge)

Until recently, Mexico has been much more lenient about the use of drones than the United States.

Back in April, Mexico News Daily reported the country's Communications and Transportation Secretariat was banning the use of camera drones at night or within just over 5.5 miles of an airport. (Video via Engadget)

It's unknown at this time if Iglesias had a special permit allowing him to fly his drone at night during his concerts.

Despite bleeding pretty profusely though, the singer kept performing. His publicist wrote on Twitter that it was another demonstration of Iglesias' professionalism.

A concertgoer told CNN Iglesias did leave the stage to get his hand wrapped, but quickly came back out and finished the concert.

Iglesias' team later posted on the singer's website that he was being treated for his injury. He has just over a month to recover before his next concert date in Mexico City.