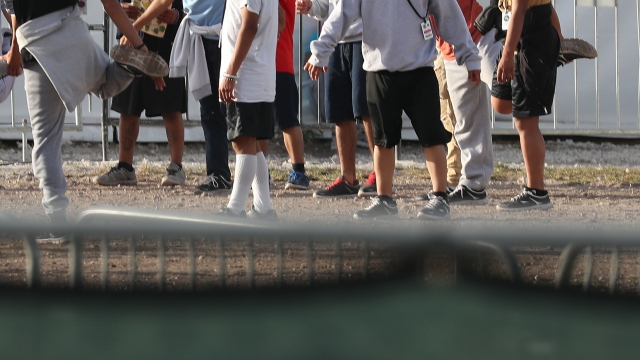 This soccer game, played by unaccompanied minors at a migrant shelter in Texas. English classes like this one in Florida. These are just two instances of programs that could be cut as federal authorities try to house and care for a growing number of children in custody.

The Trump administration is cutting funding for activities for migrant children in federal shelters. The Office of Refugee Resettlement says the influx of children crossing the southern border is straining its resources and budget.

As a result, The Washington Post reports, English classes, recreational programs and legal aid are being canceled for children at federal shelters across the country.

A leading immigration lawyer told the Post: “We’ll see them in court if they go through with it. What’s next? Drinking water? Food? . . . Where are they going to stop?”

Carlos Holguín was an attorney in a 1997 lawsuit that led to a settlement that set standards for the treatment of unaccompanied minor children detained by immigration authorities. Those standards mandate that children in custody have access to education and recreation. A coalition, including Holguín, is already suing Attorney General William Barr, alleging unlawful warehousing of minors in federally licensed facilities.

A Health and Human Services spokesman said officials are focusing on providing resources "necessary for the protection of life and safety" of the children. Due to current challenges, he said, those don't include "education services, legal services and recreation."

The Department of Health and Human Services, which includes the refugee resettlement agency, says it needs $2.9 billion in additional funding to expand shelter and care for children fleeing poverty and violence in Honduras, El Salvador and Guatemala. In 2019 alone, federal agencies were housing more than 40,000 children by the end of April, and it's on pace to care for the largest number of minors in the program’s history.