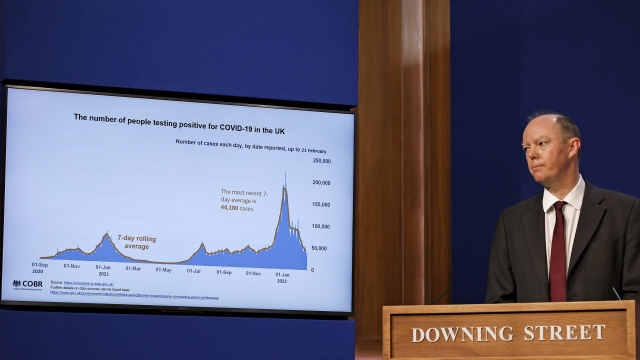 All government-mandated coronavirus restrictions in England were lifted Thursday, including the legal requirement for people who test positive for COVID-19 to isolate at home.

Officials say that those who tested positive will still be advised to stay at home for at least five days. But from Thursday they are not legally obliged to do so, and those on lower incomes will no longer get extra financial support to make up for a loss of income due to isolation. The routine tracing of infected people's contacts has also been scrapped.

Prime Minister Boris Johnson on Monday set out his Conservative government's strategy for "living with COVID" in the longer term. He said Britain is moving "from legal restrictions to personal responsibility," and that the end of all domestic legal measures marked the end of two of the darkest years in the country's peacetime history.

England already binned most virus restrictions in January, after infection rates and hospitalizations fell following a surge in late December. Face masks are no longer legally required anywhere and vaccine passports for entering nightclubs and other venues were scrapped.

Scotland, Wales and Northern Ireland, which set their own public health rules, have similarly opened up though at different paces.

Some other European countries,  including Denmark  and Sweden, have also recently lifted all COVID-19 restrictions.

Some critics have questioned whether it is too early to end all restrictions, especially isolation laws. The British Medical Association warned that Johnson's strategy fails to protect the most vulnerable people and those at highest risk of harm from COVID-19.

Some 85% of people aged 12 and older in the U.K. are fully vaccinated, and about 66% have had their third or booster dose.

The U.K. still has Europe's highest coronavirus toll after Russia, with more than 161,000 recorded deaths.