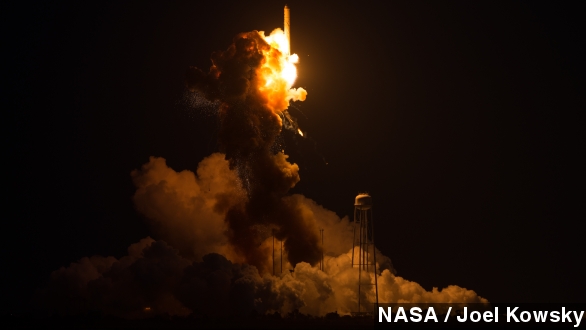 Investigators believe they know what caused the massive failure and explosion of the Antares rocket just seconds after it lifted off a Virginia launch pad. (Video via NASA)

The CEO of Orbital Sciences spoke with investors in a conference call Wednesday and focused on the main engines launching the resupply mission.

When that happened and it became clear Antares would not make it into orbit, Orbital Sciences has said officials engaged the system to destroy the rest of the rocket to avoid more damage or a crash on populated areas. (Video via YouTube / Matthew Travis)

Calling the engine "unreliable," CEO David Thompson said Orbital Sciences plans to continue with its nearly $2 billion contract with NASA to deliver supplies to the International Space Station. The AJ26 engine will no longer be used for launch.

A Wells Fargo analyst who participated in the conference call asked Thompson if it was fair to say the flaw that caused the explosion couldn't have been detected during testing but was instead a fundamental issue of the engine's reliability in an actual launch. Thompson responded, "I would say that's a good assessment." (Video via NASA)

Orbital Sciences, NASA and Aerojet conducted this test of an AJ26 engine in 2010 back when the Antares project was known as Taurus II. The rocket engines are repurposed from Soviet moon missions back in the '70s. (Video via Aerojet Rocketdyne)

The New York Times notes Orbital Sciences is already attempting to get supplies to the International Space Station by contracting with other companies with available rockets.

The Times wrote the first flight of a revised Antares program won't happen until 2016.