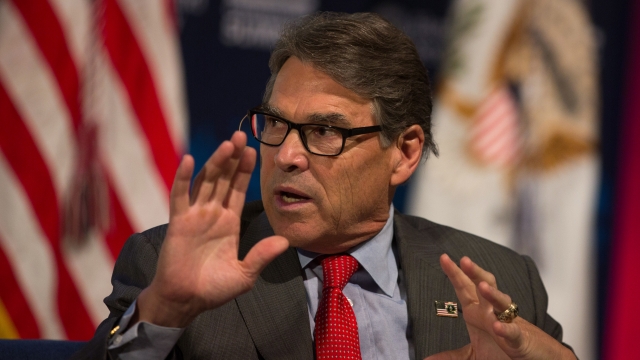 Rick Perry will soon be stepping down as the Secretary of Energy.

President Donald Trump confirmed the news of Perry's departure Thursday, saying he'd leave "at the end of the year." President Trump said he wasn't surprised, as he knew of Perry's plans since "six months ago." But the Energy Department had repeatedly denied reports that he was resigning, shutting down initial reports from six months ago, as well as reports from earlier this month.

President Trump nominated Perry to head the Department just before taking office in late 2016 — an interesting choice, given that Perry had said he would eliminate the agency during a Republican presidential primary debate in 2011. Before he joined the administration, Perry served as the governor of Texas from December 2000 to January 2015, making him the state's longest-serving governor.

He's one of several Trump administration officials who are under scrutiny in regard to President Trump's efforts to push Ukraine to investigate Democratic presidential candidate Joe Biden and his son. Perry led the U.S. delegation to the inauguration of Ukrainian President Volodymyr Zelenskyy earlier this year. He was subpoenaed for documents last week as part of House Democrats' impeachment inquiry into the president, and he has until Friday to turn over the requested documents. He has yet to say whether he'll comply with the subpoena.

President Trump praised Perry for doing "a fantastic job" during his tenure and said his replacement will be announced "very shortly."