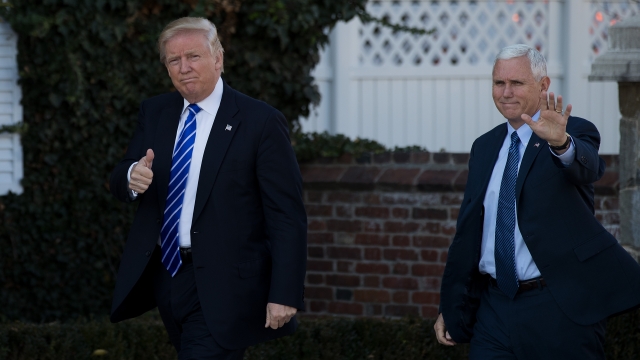 SMS
Department Of Energy Won't Give The Trump Team Some Info It Requested
By Lauren Stephenson
By Lauren Stephenson
December 13, 2016
A leaked questionnaire from Donald Trump's transition team requested the names of employees who attended meetings regarding climate change.
SHOW TRANSCRIPT

As first reported by The Washington Post on Tuesday, a spokesperson for the department said it won't provide the team with the names of employees who attended various climate talks.

The statement said the department "received significant feedback" from employees after the requests from the Trump team leaked last week.

The requests came in the form of a 74-question survey sent to the department from the president-elect's team.

And a couple of the questions had department employees, politicians and environmental groups worried that they were being targeted — especially given Trump's previous comments about climate change.

"So Obama's talking about all of this with the global warming, and a lot of it's a hoax. It's a hoax. I mean, it's a money-making industry," Trump told a crowd in South Carolina in December 2015.

The transition team requested a list of names of employees or contractors who attended meetings on "the Social Cost of Carbon" and the meetings related to the United Nations Framework Convention on Climate Change.

In addition, the team asked for emails and materials associated with the Interagency Working Group on the Social Cost of Carbon.

Trump has previously said he would get rid of some of President Obama's climate change policies. The president-elect recently told Fox News Sunday he is "still open-minded" about climate change, but "nobody really knows."

Trump previously met with former Vice President Al Gore and actor Leonardo DiCaprio, both of whom are passionate climate change activists. He also nominated Scott Pruitt, who has been skeptical of climate change, to run the Environmental Protection Agency.

News of the department's decision came as reports surfaced that former Texas Gov. Rick Perry is Trump's pick to run the department.

Perry said during his 2012 bid for the Republican presidential nomination that if he were elected president, he would eliminate the Department of Energy and two other agencies.