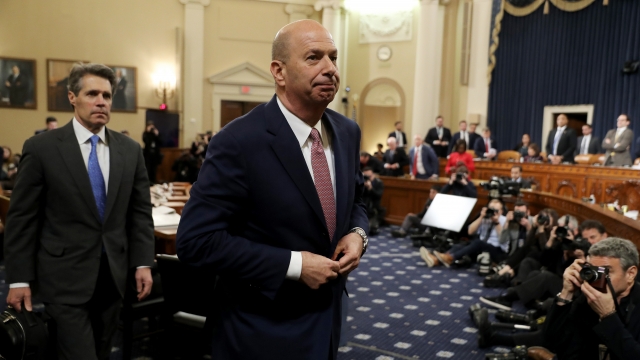 The Department of Energy says EU Ambassador Gordon Sondland "misrepresented" the facts when he talked about Energy Secretary Rick Perry during his impeachment inquiry testimony on Wednesday.

Perry's repeatedly said he didn't know about President Trump's attempt to pressure Ukraine into investigating former Vice President Joe Biden and his son, as well as the energy giant Burisma.

But Sondland — who mentioned Perry 16 times just in his opening statement alone — appeared to dispute that.

"Mr. Giuliani conveyed to Secretary Perry, Ambassador Volker, and others that President Trump wanted a public statement from President [Volodymyr] Zelenskyy committing to investigations of Burisma and the 2016 election," Sondland told lawmakers.

Sondland later testified that Perry was included on a July email that discussed the Ukrainian president's decision to comply with President Trump's request.

"As I communicated to the team, I told President Zelenskyy in advance that assurances to 'run a fully transparent investigation' and 'turn over every stone' were necessary in his call with President Trump. ... Everyone was in the loop. It was no secret," Sondland said.

In her statement, the Energy Department spokeswoman confirmed that Perry had spoken to Giuliani. But she said, "At no point before, during or after that phone call did the words 'Biden' or "Burisma' ever come up in the presence of Secretary Perry."

Perry's refused to hand over documents to impeachment investigators that relate to his dealings with Ukraine. He's also refused to testify in the inquiry.