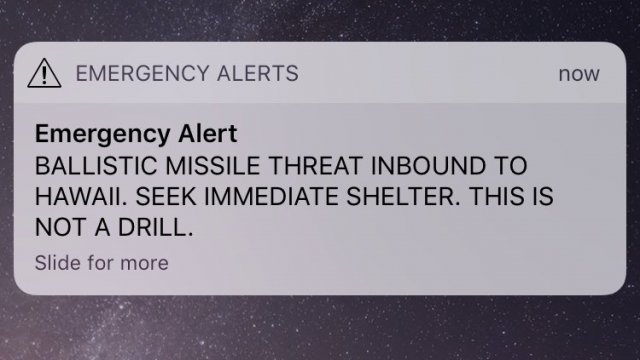 SMS
Employee Who Issued False Missile Alert In Hawaii Believed It Was Real
By Briana Koeneman
By Briana Koeneman
January 30, 2018
According to a preliminary report from the FCC, the employee who sent out the alert earlier this month didn't realize the message was part of a drill.
SHOW TRANSCRIPT

Officials say a false alarm about a ballistic missile headed toward Hawaii was caused by a miscommunication.

According to a preliminary report from the Federal Communications Commission, the employee who sent out the alert earlier this month didn't realize the message was part of a drill.

Investigators say emergency officials decided to conduct a spontaneous drill that day, which included a recording that played the phrase "exercise, exercise, exercise." But according to the report, the phrase "this is not a drill" was also played by accident. The employee receiving the alert claimed to not hear the "exercise" part of the message and assumed the threat was real.

That employee refused to speak with the FCC. But the Hawaii Emergency Management Agency provided investigators with a statement written by the employee shortly after the incident.

Officials previously said the false alarm occurred when someone accidentally pushed the wrong button. It took 38 minutes to correct the alert after it was issued.