Eminem Reconciles With His Mom In New Video 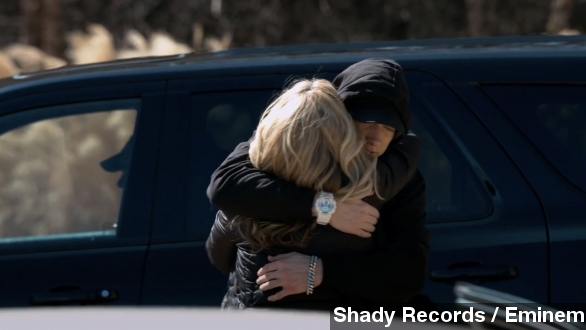 SMS
Eminem Reconciles With His Mom In New Video

By Erik Shute
May 12, 2014
On Mother's Day, rapper Eminem released a video for his track "Headlights" dedicated to his mom and their reconciliation.
SHOW TRANSCRIPT

​Eminem put his pride aside and talents to work on Mother's Day. In a new video for the track "Headlights," the rapper reconciles with his own mom, Debbie Mathers.

The video portrays his mother's point of view and shows heartbreaking scenes filled with cigarettes, old photo albums and a torn-up Christmas. (Via Shady Records / Eminem)

Over the images, the rapper says: "But as stubborn as we are / Did I take it too far? / 'Cleaning Out My Closet' and all them other songs? … But regardless, I don't hate you / 'cause ma, you're still beautiful to me." (Via Shady Records / Eminem)

Spike Lee directed the video, which was shot in Eminem's infamous 8-Mile home in Detroit. (Via Shady Records)

KJTV says the video is a raw apology for the anger Eminem channeled toward his mom and into his music.

"The rapper and his mother have had a troubled relationship for a number of years. He slammed her in previous songs like 'Cleanin' Out My Closet' ... but the artist is now revealing their connected relationship." (Via KJTV)

In a climactic ending, mother and son are finally reunited as Eminem tears down his defenses to say he still loves her quote, "'cause you're my mom." (Via Flickr / Lam HUA)

Stereogum doesn't get as emotional but says his message and the video are are a win-win. "It's an empathetic piece of work, and it makes me like the song more, which, after all, is what videos are supposed to do."

Carrying home the hook on "Headlights" is fun. frontman Nate Ruess. Eminem released the single off his latest album "The Marshall Mathers LP 2." The album debuted at No. 1 on Billboard last November.