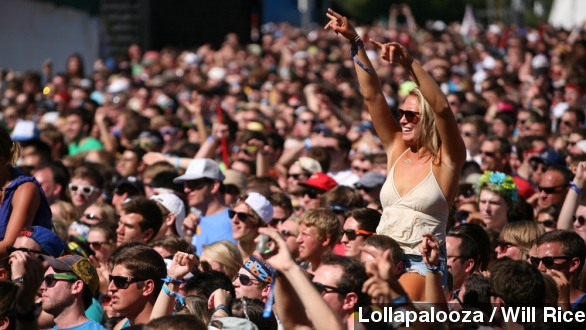 By Adam Falk
March 26, 2014
Lollapalooza’s 2014 lineup is out. Leaked headliners Eminem, Skrillex, Kings of Leon and Arctic Monkeys are in, as is OutKast and Calvin Harris.
SHOW TRANSCRIPT

The Lollapalooza 2014 lineup is out. And we might’ve been surprised by a few names if the Chicago Tribune hadn’t leaked them.

“We do know that four of the headliners are Eminem, Skrillex, Arctic Monkeys and Kings of Leon”

Spot on, guys. The official Lollapalooza 2014 lineup was announced Wednesday, and those four acts are all set to rock Chicago’s Grant Park August 1-3. Joining them is –  (Via Lollapalooza)

– you guessed it, OutKast. The reunited rap duo adds the popular festival to its summer lineup, which begins with an appearance at Coachella in April. (Via LaFace / OutKast)

Finally, EDM star Calvin Harris rounds out the top six. He had crowds dancing back at Lolla 2012. (Via Columbia Records / Calvin Harris)

In fact, all of the headliners, except OutKast, have been to the Grant Park party before.

Kings of Leon headlined the festival back in 2009, just after this took over radio. (Via RCA / Kings Of Leon)

But look just below those names, and you’ll see newcomer Lorde slid into the seventh spot. (Via CBS “Late Show With David Letterman”)

“I’ve never seen a diamond in the flesh.”

Her quick success from the hit “Royals” earned the 17-year-old from New Zealand top billing at Coachella as well. (Via Universal / Lorde)

For those who’ve been following lineups, you might notice a bit of a difference in this year’s lineup compared to last year.

In 2013, Lolla-goers saw quite a few traditional rock bands – The Cure, Mumford & Sons, The Killers. This year– Eminem, OutKast, Skrillex – give rap and EDM heavier influence. (Via Lollapalooza)

The Chicago Tribune writes, “With 24 as the average age of Lollapalooza-goers ... the lineup skews younger and more dance-oriented than many North American rock festivals.”

That said, with more than 130 artists, the 2014 lineup provides plenty of variety – even for those at the ripe age of 25. So if you’re interested – (Via Lollapalooza)

– actually sorry, you’re WAY too late. Three-day passes sold out within an hour, and now, single day passes are all taken too. (Via Spin)

Capacity there is only 100,000 per day, and it looks like Lolla will have no trouble filling it.