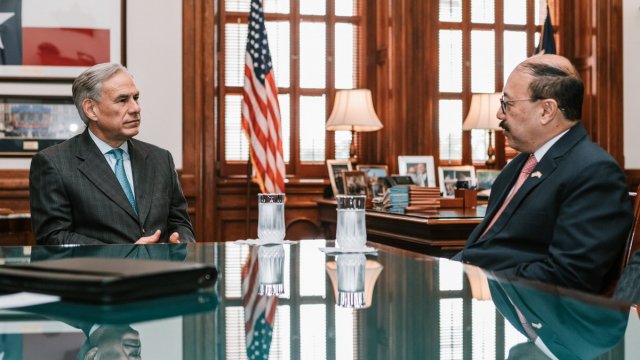 Emails between Texas officials show Gov. Greg Abbott's office had a hand in a botched purge of the state's voter rolls that led to the resignation of the Texas' secretary of state.

Before we get into that, let's take a step back. Earlier this year, Texas Secretary of State David Whitley's office reviewed the voter rolls and said it found as many as 95,000 registered voters who, at some point, identified themselves as non-citizens to the Texas Department of Public Safety, or DPS. Of those flagged people, the state secretary's office said about 58,000 voted in one or more Texas election.

Whitley's office gave that list of suspected non-citizens to county officials and asked them to decide if the voters needed to be removed. Multiple civil rights groups sued Whitley, and in April, a federal judge blocked Texas from removing the suspected non-citizens from its voter rolls. As part of a settlement, Texas officials agreed to drop the investigation. Whitley resigned last month.

Now, a law firm that represented plaintiffs in the case has unveiled emails sent between Texas officials that show the governor's office played a part in the attempted voter roll purge.

One email sent in August 2018 says DPS received "an urgent request from the governor's office" to compare previously reviewed records with voter rolls. Another sent that same day said: "The governor is interested in getting this information as soon as possible." While it's unclear what specific information that official is referencing, the email thread appears to focus on citizenship status records.

Abbott has said he didn't talk to DPS about the voter roll purge until March this year.