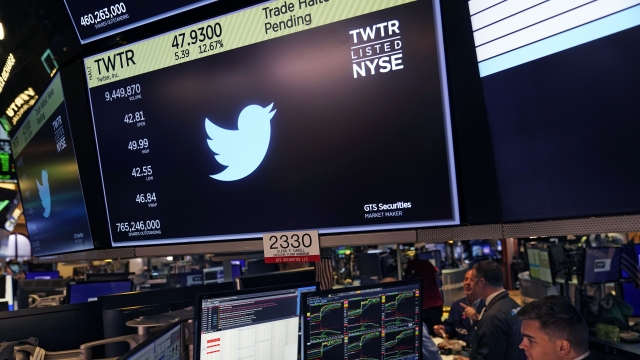 Trading in shares of Twitter was halted after the stock spiked on reports that Elon Musk would proceed with his $44 billion deal to buy the company after months of legal battles.

For a second time, Musk offered to buy the San Francisco company at $54.20. Twitter's stock jumped nearly 13% to $47.93 before trading stopped on the New York Stock Exchange, which listed “news pending” as the reason for the halt. Trading halts are how stock exchanges give investors a forced timeout when trading for a stock gets too chaotic, or when a company is about to offer market-moving news.

Bloomberg News reported Tuesday that Musk made the proposal in a letter to Twitter, according to people familiar with the case who were not identified.

Musk has been trying to back out of the deal for several months after signing on to buy the social media platform in April. Shareholders have already approved the sale, and legal experts say Musk faced a huge challenge to defend against a Twitter lawsuit, which was filed in July.

Musk claimed that Twitter under-counted the number of fake accounts on its platform, and Twitter sued when Musk announced the deal was off.

The trial seeking to compel Musk to buy Twitter is set to start in Delaware Chancery Court on Oct. 17.

Musk’s argument for walking away from the deal has largely rested on the allegation that Twitter misrepresented how it measures the magnitude of “spam bot” accounts that are useless to advertisers. But most legal experts believe he faced an uphill battle in convincing Chancellor Kathaleen St. Jude McCormick, the court’s head judge, that something changed since the April merger agreement that justifies terminating the deal.

By going through with the deal, Musk essentially gave Twitter what it was seeking from the court — “specific performance” of the contract with Musk, meaning he would have to go through with the purchase at the original price. The contract Musk signed also has a $1 billion breakup fee.