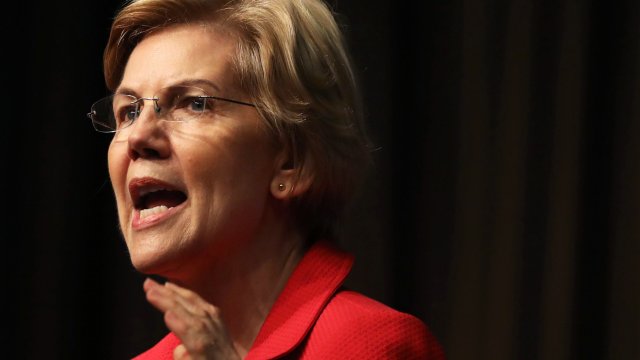 SMS
Elizabeth Warren Unveils Plan To Wipe Out Student Loan Debt
By Briana Koeneman
By Briana Koeneman
April 22, 2019
Under the plan, Americans in households earning less than $100,000 per year would have $50,000 of their student loans forgiven.
SHOW TRANSCRIPT

Sen. Elizabeth Warren wants to wipe out student loan debt for millions of Americans and make all public colleges tuition-free.

The Democratic presidential candidate unveiled the ambitious proposal in a Medium post Monday.

Under the plan, Americans in households earning less than $100,000 per year would have $50,000 of their student loans forgiven. Warren says that would provide relief for more than 95% of the 45 million Americans saddled with student loan debt.

The proposal also aims to eliminate tuition and fees at all public two- and four-year colleges. The federal government would partner with states to split the bill.

Warren's campaign estimated the plan will cost about $1.25 trillion over the course of 10 years. She said increasing taxes on ultra-wealthy households would fund a good portion of the cost.

The proposal has gotten a thumbs-up from groups like the American Federation of Teachers. And President Donald Trump has called student loan debt "outrageous" and vowed to fix it.

But, as The Wall Street Journal notes, it's likely that Republicans will criticize the plan as harmful to the U.S.'s fiscal health and economic growth.