Warren Unveils Details Of Medicare For All Plan 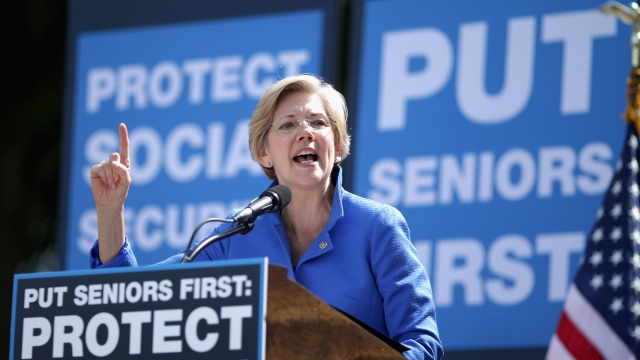 SMS
Warren Unveils Details Of Medicare For All Plan
By Amber Strong
By Amber Strong
November 1, 2019
Known as the candidate with a plan for everything, Sen. Elizabeth Warren revealed the much anticipated details behind her Medicare for All initiative.
SHOW TRANSCRIPT

Democratic presidential candidate Elizabeth Warren rolled out her greatly anticipated Medicare for All plan, which she says will not raise taxes.

Under Warren's Medicare for All plan, all health care costs would be covered by the government, eliminating the need for private insurance.

Doubling down on her promise to protect the middle class and stick it to the rich. Warren promises not a penny increase for middle class Americans, setting her apart from fellow candidate Senator Bernie Sanders.

First the price tag - 20.5 trillion dollars in new federal spending. Drawing from the opinion of policy experts, Warren says she can pull off the increase in just under 10 years. First, by taking all current state and local spending on Medicare and funneling it to Medicare for All.

That leaves the Massachusetts senator a few trillion dollars short. She says she’ll make up the rest with cuts in defense spending, a 6% wealth tax on billionaires, and tackling tax evasion and fraud, among others.

Under Obamacare companies with 50 plus workers are required to provide health insurance. Warren’s plan would make businesses transfer those dollars toward Medicare for All instead.

Warren’s unveiling coincides with the first day of open enrollment for Obamacare.

Some of her competitors have leaned into "Medicare for all" who want it, allowing consumers to choose. A spokesman for the Biden campaign calls Warren’s plan, 'mathematical gymnastics.'