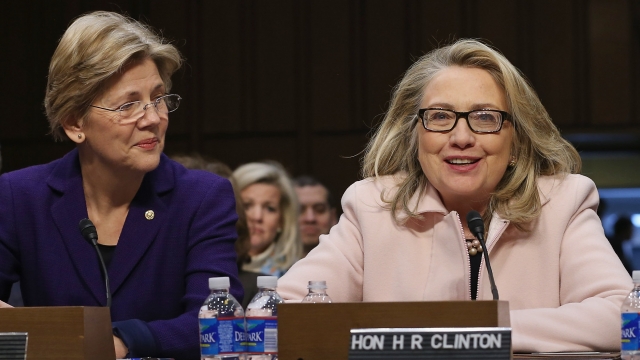 As if the buzz around Hillary Clinton's veepstakes weren't frenzied enough, potential No. 2 Elizabeth Warren just made it a whole lot worse.

The Massachusetts senator visited Clinton campaign headquarters in Brooklyn on Friday morning. She talked to campaign staff, took pictures and gave a pep talk that at least one staffer said consisted of the nuanced advice of "Don't screw this up."

The visit itself isn't all that odd and could be completely innocent. Warren joined team #ImWithHer last week when she endorsed Clinton and has been Clinton's best Donald Trump-attacking surrogate for a while now.

For months, Warren has gone a Trump-rampage, calling the presumptive GOP nominee a "loser" and a "bully" and accusing him of building a "campaign on racism, sexism, and xenophobia."

But all of those selfies with Warren were wiped from the internet — just not before reporters screen grabbed and tweeted them out. And that is what has the VP fire blazing more than before, the implication being the Clinton campaign is trying to keep VP talk down to a minimum.

That seems to be a futile effort. The women met at Clinton's home after Warren's public endorsement and have been coy, at best, when asked about the possibility of a Clinton-Warren ticket.

When Clinton was asked on June 10 about the possibility, she changed the subject to caffeine, saying: "You guys have go to try the cold Chai."

But maybe the headquarters visit doesn't mean anything. After all, Bon Jovi has also stopped by recently.

This video includes clips from ABC, MSNBC, CBS, Hillary for America and the Office of Elizabeth Warren.