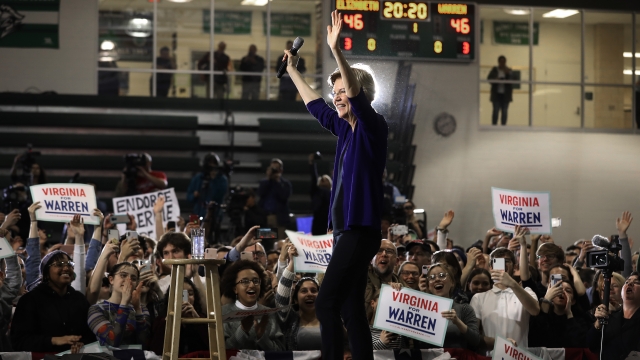 Despite weak performances in Iowa and New Hampshire, Sen. Elizabeth Warren says her campaign is forging on with an eye towards super Tuesday states like Virginia.

So here we are Virginia. The primaries have really started. We've heard from two states. We've got 55 states and territories ready to go.

And the Massachusetts senator used a campaign stop here to take a swipe at a rival candidate also focusing on Super Tuesday — former mayor of New York City Mike Bloomberg.

We've been going at this for about a year. Some people got in a little later than others. Michael Bloomberg came in on the billionaire plan, just buy yourself a nomination.

Bloomberg has spent hundreds of millions of dollars of his own money to influence voters in the states that vote on Super Tuesday and beyond.

Virginia votes March 3, along with more than a dozen states, including Warren’s home state of Massachusetts.

More than 1,300 delegates to the Democratic National Convention are up for grabs.