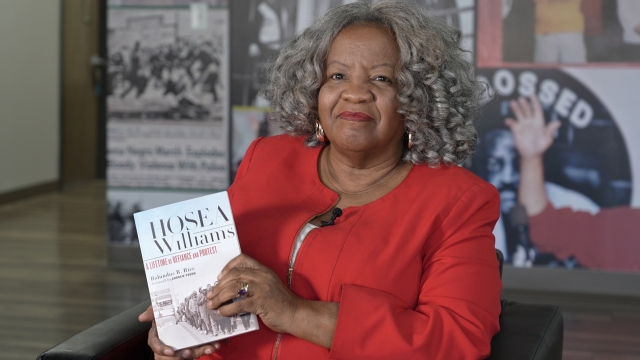 Sometimes, no matter how hard you try, you can't shake your family legacy.

For Elisabeth Williams Omilami — the daughter of civil rights leader Hosea Williams — she tried other careers but ended up right back where she started.

"My father, Hosea Williams, many people will remember him as being the one that walked with John Lewis across the Edmund Pettus Bridge that led to the Civil Rights Act and the Voting Rights Act," she said. "He was Martin Luther King's national field organizer."

She had Hollywood dreams and was well on her way until something pulled at her, calling her home.

Now, tucked away in an Atlanta neighborhood, Omilami continues her father's mission of caring for others and speaking out for social injustices.

The ordeal would haunt her for life. She was locked up with dozens of beaten and bloody protesters during a march with her father, but it also led to her rising up to become a powerful daughter of the movement.

"He invented the night march, which was a terrifying march, but it was the best way to get the adults out. It was in the evening and they would usually get beat, especially in the South," Omilami said. "So his job was basically, he and his staff were the sacrificial lambs that would go into these towns and face Bull Connor, face the state patrol, face the police ... We had a cross burned in our yard. I saw people beat ... I saw all of that before I went away to high school. It put something in me."

In Atlanta, a mural honors her father. He was known for wearing blue jean overalls so people knew he was never too important to approach.

"When you get too big to do the little things, then you're just too little to do the big things," Omilami said. "I love that because sometimes we can get so holy with no Earthly good."

During her father's time in the Army, while he was dressed in uniform, White men beat him up for drinking out of a "Whites only" water fountain. That incident led Williams on his journey for civil rights for Black people. But there was another pivotal moment that changed his life.

"Hosea Williams saw a homeless man eating out of a trash can ... And the man said that he hadn't eaten in three days and come to find out that he had lost his job."

When Williams died in 2000, Omilami grabbed the reins and dug in, even buying a building so they could have a central location and expanding services.

"We changed our name from Hosea Feed the Hungry and Homeless to Hosea Helps because we do so much more than feed people now," Omilami said.

Some of those services include rental assistance during COVID, teaching nonprofit leaders how to get grants and national and international relief — to mention a few.

"Why do we have this in America?" Omilami asked. "When I started realizing that children were hungry, when I started seeing children come to our office and look at a plum and had never seen a plum before, were asking 'What is this?'"

The hope is to leave the organization, and the people who come in contact with it, in a better position.

"That is what leads me every day. To try to make a better life for others," Omilami said.

Omilami says she's not ready to stop helping, but she may be ready for a new chapter — one that includes telling her story and asking one important question: What are you doing for others?