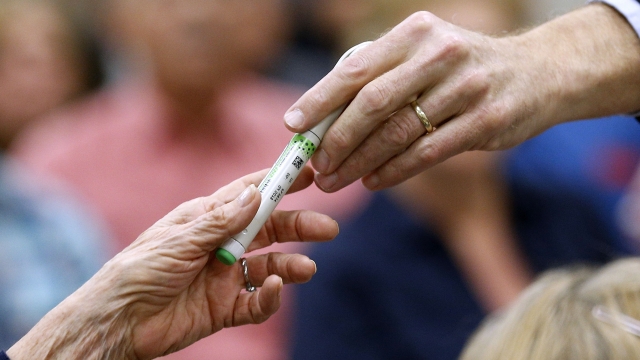 SMS
Eli Lilly To Offer Generic Insulin At Half The Price Of Name Brand
By Ahmed Jawadi
By Ahmed Jawadi
March 4, 2019
Insulin Lispro is "identical" to its name-brand counterpart and will be available in both vial and pen options.
SHOW TRANSCRIPT

Eli Lilly's CEO said in a statement Monday the company will soon launch a new generic version of its popular Humalog insulin at half the cost. The new version, called Insulin Lispro, is "identical" to its name-brand counterpart and will be available in both vial and pen options. The company says the cheaper drug will cost $137.35 for a single vial and $262.20 for a five-pack of KwikPens.

The news comes amid recent criticism of the rapidly growing costs of the nearly 100-year-old medication. Two U.S. senators launched an investigation into the matter last month and questioned Eli Lilly in a letter about its pricing practices. According to the letter, the price for Humalog rose from $35 in 2001 to $234 in 2015, a 585 percent increase. A report from the CDC estimates more than 30 million Americans have diabetes.

Eli Lilly said the cheaper version will benefit patients who pay for insulin out of pocket, since it doesn't deal in rebates. The price of the drug will not change for those with flat copay insurance plans, since the company says they already "face lower out-of-pocket costs."