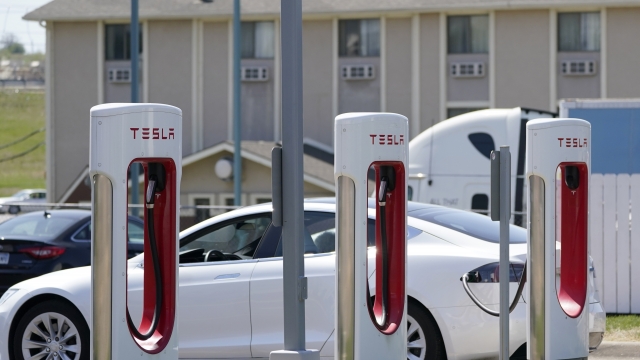 SMS
Electric Car Charging Could Use More Help
By Eli Kintisch
By Eli Kintisch
November 15, 2021
Charging electric cars in the U.S. could be made easier with more funding for national charging networks.
SHOW TRANSCRIPT

Picture this: You're the proud new owner of a Tesla Model Y,  the best-selling electric vehicle in the United States.

Your battery is full, so you take it for a spin. But after about 300 miles, the battery is on "E." Now what?

Like any electric car, you could charge it at home, but using a standard wall socket to fully charge the battery will take days.

Public charging stations are another option.

Tesla, Volkswagen and other companies have installed fast charging stations across the country, usually near major highways. One of those will fully charge your Model Y in just 30 minutes.

Here's how it works: About 4,000 lithium-ion battery cells power the Model Y, sitting underneath the vehicle.

As current flows in from a charger, lithium ions move through the battery to the positive layer.

When it's time to drive, the ions flow back, and current flows to the negative layer, giving power to the car.

When the battery cells run out of charge, you have to plug in.

If you're using a public charger, apps can help you plan your journey, even showing you availability at commercial charging stations down the road. If they're full, you'll have to wait.

And that wait continues as your car charges.

That's created a chicken-and-egg problem: Waiting to charge an electric car and worries about whether it'll have enough juice to get you to your destination are still major hurdles to winning over consumers.

The plan to spend $7.5 billion in taxpayer funding to expand the national charging network would increase the number of stations from about 40,000 to 540,000. Critics say it's too expensive. Advocates say it's a necessary cost to weaning the country off gas-powered cars.