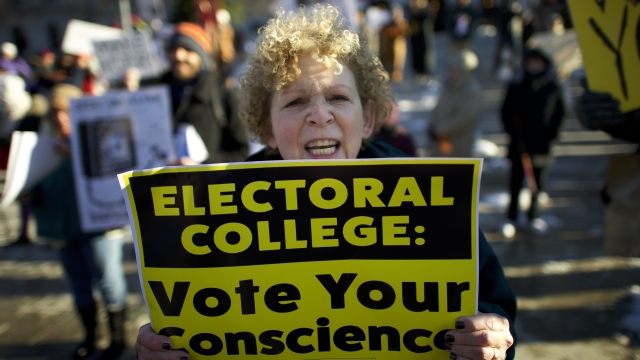 SMS
Court Rules Electoral College Members Can Deviate From Popular Vote
By LeeAnne Lowry
By LeeAnne Lowry
August 22, 2019
In 2016, a Colorado elector voted for John Kasich, even though Hillary Clinton won the state's popular vote. Now a court says he had the right to.
SHOW TRANSCRIPT

A U.S. appeals court in Denver has decided that Electoral College members can choose which presidential candidate they vote for, rather than follow their state's popular vote.

In the 2016 general election, Colorado elector Micheal Baca voted for Republican John Kasich, even though Hillary Clinton won the state's popular vote. Because Colorado law requires electors to represent the will of the popular vote, Colorado's Secretary of State fired him and his vote was thrown out.

Baca and two other electors sued Colorado's Department of State. The district court dismissed the case, but the electors appealed.

On Tuesday, the appeals court ruled that Colorado violated the Constitution. Now electors don't have to follow the popular vote in the 10th circuit: Colorado, Kansas, New Mexico, Oklahoma, Utah and Wyoming.

And that's a big statement: It means a single elector can sway the outcome of an election. Colorado Secretary of State Jena Griswold said the decision "sets a dangerous precedent."