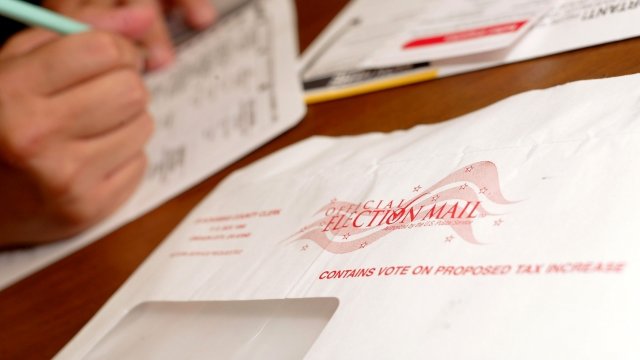 North Carolina election officials are investigating claims that absentee ballots were tampered with, which could've influenced a U.S. House election.

One of the last undecided midterm races could be drawn out even longer. North Carolina election officials pressed pause on certifying a winner in the U.S. House race between Republican Mark Harris and Democrat Dan McCready because of election fraud allegations.

This all comes down to mail-in absentee ballots, one of three ways you can vote in North Carolina. The state's Board of Elections is looking into claims of "irregularities" that could've helped Harris win North Carolina's 9th District race.

"A white woman came to my house saying that she was helping people vote," said Emma Lee Shipman, a Bladen County resident.

This woman and others in her area claim people went door-to-door to collect or finish absentee ballots. Both those things are illegal in North Carolina.

In addition, photocopies of absentee ballots show only eight individuals signed off on a large number of ballots — not illegal, but unusual.

"What is most concerning is the allegation that these ballots, and possibly others, were illegally collected and not mailed individually as required by law," WSOC anchor and reporter Paul Boyd said.

And at least some of the people who signed off on those absentee ballots are connected to one man, Leslie McCrae Dowless, who was paid to work on Harris' campaign.

Dowless was actually featured in a 2016 episode of "This American Life" that reported on very similar circumstances in North Carolina's 2016 race for governor.

"McCrae [Dowless] is getting accused of paying people to obtain absentee ballots, fill them out and cast their votes on someone else's behalf. That, for sure, is illegal. McCrae says he didn't do anything wrong," journalist Zoe Chace told NPR.

Let's be clear: So far, none of this confirms wrongdoing, but it's enough to have the state's elections board hit the brakes on certifying results. So, what next?

The elections board can call for a new election if it finds the tampering of absentee ballots might have affected the results of this race.

In the meantime, Harris has called for the board to certify the election results while McCready has welcomed the investigation.

The North Carolina Board of Elections and Ethics Enforcement plans to hold an evidentiary hearing on or before Dec. 21 to look into irregularities with the 9th District race.