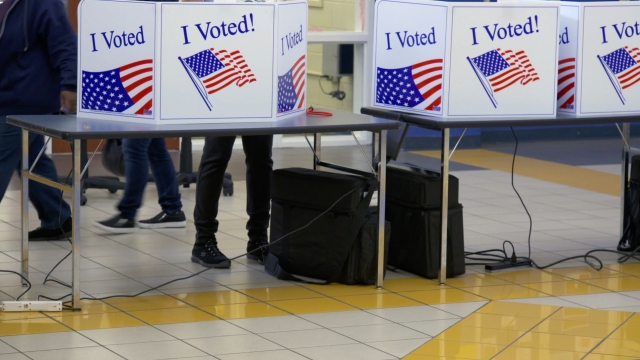 Newsy spoke with several chief election officials who say they're taking the threat seriously but have yet to make emergency plans for November.

As the coronavirus spreads across the globe, election security experts in the United States are starting to warn that an outbreak could impact elections here at home.

"The Coronavirus could have the potential to alter how the 2020 election is administered," says David Levine, an elections integrity fellow at the Alliance for Securing Democracy. "You could see folks who are choosing not to come out to vote. Folks could be fearful, fearful about being able to gather in larger places."

"My concerns with that go to any sort of threat that may hamper people from actually getting to the polls on Election Day," says Thomas Hicks, a commissioner with the U.S. Election Assistance Commission. "If the coronavirus or any other outbreak is causing folks to not show up at the polls, what sort of things can we do to ensure that people still have the right to vote?"

The threat is beginning to catch the attention of chief election officials, but a number of states have yet to begin formulating emergency plans.

Newsy obtained an email from the National Association of Secretaries of State, telling members that if they haven’t made preparations, quote, “it may be helpful to tout your absentee ballot process, online voter registration and other election procedures.”

In California, where the first person in the U.S. tested positive for the virus, the spokesperson for Secretary of State Alex Padilla told Newsy, “We, of course, will monitor any public health alerts from state or federal officials that could impact election administration. Right now there are no indications of any disruptions to California’s March 3, 2020 Presidential Primary.”

In Washington state, where two people have currently died from the virus, voters cast ballots by mail for the March 10 primary. The secretary of state did not respond to a request for comment. Newsy also spoke to leaders in other states, including West Virginia Secretary of State Mac Warner.

"It's not a general concern or a major concern. It is an item of interest."

Warner says that at the moment, his staff just has too many other things to do, like training poll workers.

"If it were actually to come to West Virginia or the United States in a substantial fashion, then we'd start moving into the actual planning process. But it doesn't make sense right now to plan for something that is a remote possibility," Warner says.

If a particular area was affected, Warner says a precinct location could change, and the governor would declare an emergency in the event of a larger outbreak -- jumpstarting new rules.

He also spoke about Russian disinformation targeting the coronavirus.

"They're saying that the U.S. started it as an economic battle against China and so forth, part of the trade war," says Warner. "Russia is doing this to cause dissension or to cause distrust of the Americans and officials of our government and of our election. I'm sure they will twist it in that regard."

That could also influence voter turnout, so authorities are urging voters to get their information from trusted sources. Hicks tells voters:

"To not have fear, to go out to exercise your rights. And if possible, if you are concerned, request an absentee ballot or try to vote early."