Election Could Shape The Future Of Canada's Oil Sands 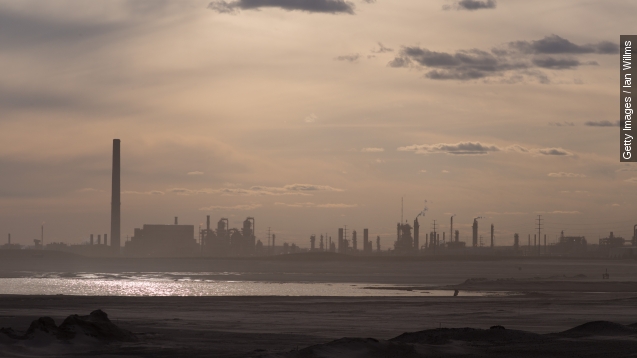 Canada's oil sands, long a source of controversy, have fallen by the wayside. (Video via YouTube / reclaim turtle island)

The sands are used for oil extraction, a process environmentalists say is too energy intensive and destructive. (Video via CCTV)

And oil sands have also put Canada at odds with other developed countries when it comes to climate change. The country is offering more conservative emissions goals than the U.S., among others. (Video via The White House)

"20 percent of Alberta's budget is paid for by oil royalties, and with the price sitting around 63 dollars a barrel, it stands to lose billions," a CBC reporter  said.

Last year's steep decline in oil prices led to major layoffs, which led several politicians to back off support for the sands.

Canadian Prime Minister Stephen Harper has been one of oil sands' biggest advocates, even lobbying President Obama to support the Keystone XL pipeline, which would allow oil production to expand. (Video via Prime Minister of Canada)

"I think there's very peculiar politics with this particular administration. I believe that whether this project goes ahead or not under this administration, it will ultimately go ahead under a subsequent administration," Harper told Bloomberg.

But Harper's facing a contentious election, in which his Conservative Party could lose ground to Canada's centrist Liberal Party and its left wing New Democratic Party. (Video via The Globe and Mail)

According to polls, the Liberal Party is the biggest threat, and while its leader Justin Trudeau supports oil sands, he's come out against pipelines in the past. (Video via Liberal Party)

"The Northern Gateway Pipeline threatens not only the British Columbia coastal economy, but the jobs of thousands of people who live on the ocean," Trudeau told a press conference.

Oil is a critical component of Canada's economy, but polling says transitioning to a post-carbon economy is a also major priority for Canadians.

And while there are sharp regional divides on oil sands production within Canada, elections could be changing that as well.

The left wing NDP Party won big in May elections in Alberta, which happens to be home to the oil sands and, until this year, was firmly in Conservative control. (Video via CBC)