Japan's PM Might Get A Shot At Revising Its Pacifist Constitution 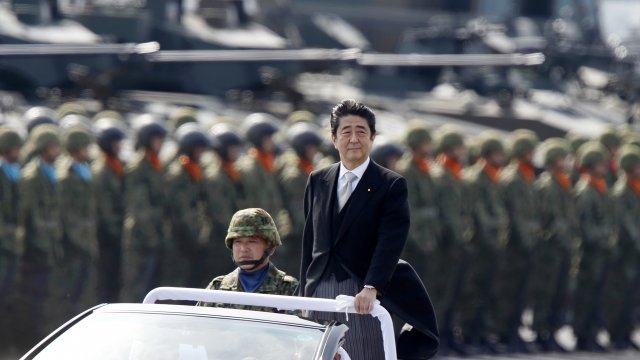 Japan's ruling coalition seems poised to maintain its hold on Parliament's lower house, and that's a sign Prime Minister Shinzo Abe could forge ahead with his goal to revise the country's constitution.

The election is a step toward realizing Abe's goal to enshrine Japan's right to self-defense.

In recent months, North Korea has launched missiles over the island nation and escalated rhetoric with the United States. More than 50,000 U.S. military personnel are currently stationed in Japan.

Experts say President Xi Jinping almost assuredly will be given a second term.

Japan does have a standing defensive force but has abided by Article 9 and mostly relies on the U.S. for large-scale defense. Abe wants to add a constitutional amendment legitimizing the nation's Self-Defense Forces.

This is a much gentler approach by Abe's party than in 2012, when the LDP aimed to cut the part of Article 9 that disallows possession of war potential and expand the definition of self-defense to include "collective self-defense," or aiding an ally even if Japan isn't directly threatened. Abe got the latter half of that amendment passed as a security bill in 2015.

In order to change the constitution, Abe would have to get the measure through both chambers of Parliament with a two-thirds majority. Only then would the change be put on a national referendum ballot, where it would need a simple majority to pass.

In September, Abe dissolved Japan's House of Representatives and called for a snap election in an effort to shore up support for his Liberal Democratic Party and its junior coalition partner, Komeito.

In the House of Councillors, Abe can likely rely on support from smaller, pro-amendment parties to reach the two-thirds threshold.