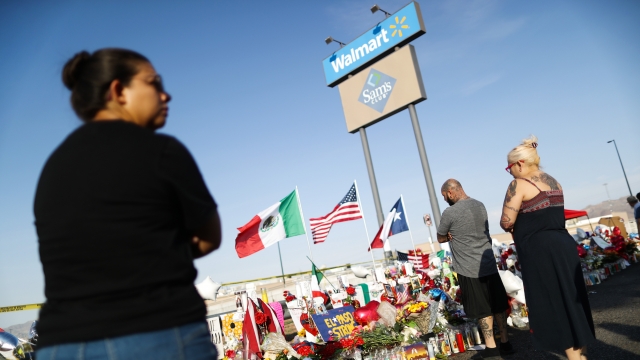 SMS
El Paso Walmart Reopens 3 Months After Shooting
By Briana Koeneman
By Briana Koeneman
November 14, 2019
The store where 22 people were killed in August opened its doors Thursday for the first time since the shooting.
SHOW TRANSCRIPT

The Walmart in El Paso, Texas, where 22 people were killed this summer has opened its doors for the first time since the shooting.

The store reopened Thursday morning. An American flag that's been at half-staff on the store's roof since the Aug. 3 shooting was also raised.

The store's manager told the El Paso Times Wednesday raising the flag would "symbolize that we are open and ready for business and ready to welcome and embrace our customers as they walk through the door."

According to CNN, almost everything inside the store has been revamped or remodeled. New security cameras and automated security gates have been installed. The self-checkout area has been expanded. Even the floors and shopping carts are different.

Walmart's memorial to the victims of the shooting is still under construction in the store's parking lot. The company's senior director of communications said the 30-foot structure will be completed in about a week.