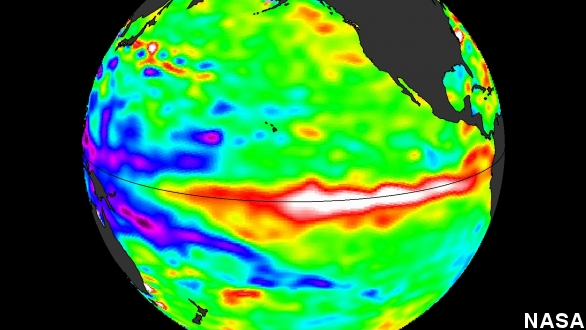 By Steven Sparkman
April 22, 2014
With Pacific ocean water already showing signs of warming, the NOAA says there's about a 66 percent chance the event will begin before November.
SHOW TRANSCRIPT

Over the past couple of months, meteorologists have been warning that the weather event known as El Niño could be making a comeback this year. Now, they say it's getting more and more likely and, most importantly, that the coming El Niño could be one of the strongest on record.

El Niño is an event that occurs every few years. Warmer water in the Pacific Ocean comes to the surface and moves eastward, and that warm water changes weather patterns for a good chunk of the planet. (Via National Oceanic and Atmospheric Administraton)

It's notoriously difficult to predict, but the NOAA says surface temperatures in the Pacific are already getting warmer, and that there's a 66 percent chance of an El Niño event officially beginning by November. It could last nine months or more.

El Niño can have different effects depending on how that warming trend plays out, but current predictions sound pretty good at first glance.

For instance, it would likely bring heavy rain to California this winter, which, with much of the state in extreme drought, could definitely be seen as good news. (Via KGTV)

Plus tropical storm activity in the north Atlantic could be somewhat suppressed, meaning fewer deadly hurricanes. (Via The Weather Channel)

But here comes the bad news: meteorologists say, as of right now, the Pacific is acting a lot like it did prior to the 1997-98 El Niño, which threw weather systems into chaos and made 1998 an unusually hot year.

Those rains in California? They could take the state from one extreme to the other and spawn widespread flooding. (Via CNBC)

And different scientists told New Scientist and Wired that a strong El Niño event might make 2014 or 2015 the hottest year on record.

But while areas like Australia and Central and South America prepare for drought and Southeast Asia prepares for heavy rains, most of the U.S. can take comfort in calls for a warm, dry winter — a far cry from the plague of polar vortexes we just experienced.