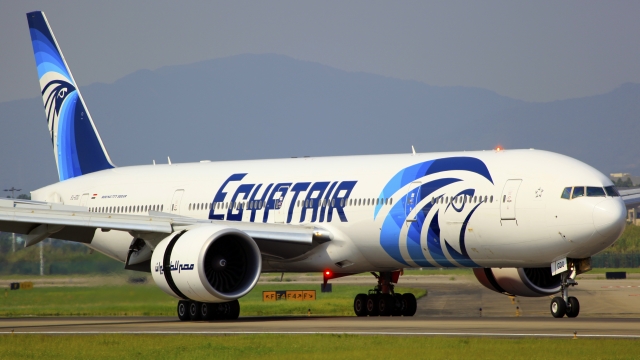 SMS
EgyptAir Plane Hijacker Arrested After Hourslong Standoff
By Ryan Biek
By Ryan Biek
March 29, 2016
An EgyptAir flight was taken over late Monday night by a hijacker who claimed to be wearing an explosive belt.
SHOW TRANSCRIPT

An EgyptAir flight was hijacked late Monday night by a passenger claiming to be wearing an explosive belt.

The hijacker, identified by officials as Seif El Din Mustafa, an Egyptian national, reportedly wanted to speak with his estranged wife in Cyprus. The flight was diverted Tuesday morning to Larnaca Airport in Cyprus.

Cyprus' Ministry of Foreign Affairs reports the hijacker was arrested after hours of negotiations. No injuries to passengers or crew members have been reported.

The incident raised some concerns about Egypt's flight security. Footage shows hijacker going through airport security. Officials say the belt of explosives he claimed to be wearing was fake.

The president of Cyprus claimed this was not a terrorist attack.

This video includes clips from BBC, Cyprus State TV via CNN and byeangel / CC BY SA 2.0.