Egypt's President May Be Given An Extra 12 Years In Office 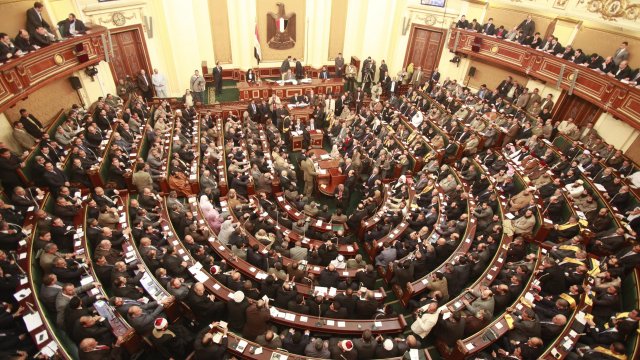 SMS
Egypt's President May Be Given An Extra 12 Years In Office
By LeeAnne Lowry
By LeeAnne Lowry
February 14, 2019
Egypt's parliament voted to move forward constitutional amendments that would give the country's president more power and extend his time in office.
SHOW TRANSCRIPT

Egypt's parliament has pushed forward constitutional amendments that could keep the country's president in office until 2034.

On Wednesday, parliament debated a draft proposal of 22 amendments that would extend presidential terms and give both President Abdel-Fattah el-Sissi and the military more power. On Thursday, they voted it through.

Giving the military extra political power would be a significant decision for Egypt, since the military played a large role in Egypt's 2011 revolution and 2013 coup that led to el-Sissi's presidency. El-Sissi entered his second term by overwhelmingly winning an election, but five candidates looking to oppose him were barred from running.

Currently, Egyptian presidents are limited to two four-year terms, and el-Sissi is set to leave office in 2022. If these amendments are voted through, terms would increase to six years each, and el-Sissi's term would start over in 2022, potentially giving him an extra 12 years in office.

While supporters believe the constitutional changes would bring stability after recent political turmoil, opponents think giving the president more power is a step toward authoritarianism.

A representative from the Tahrir Institute for Middle East Policy told CNN, "Undoubtedly the ongoing campaign of repression of government critics and civil society is meant to deter anyone who would dare try to mobilize a campaign for a 'no' vote."

According to The Guardian, the bill is expected to see a second reading and debate by early next month, and then the public will have a chance to approve the changes.