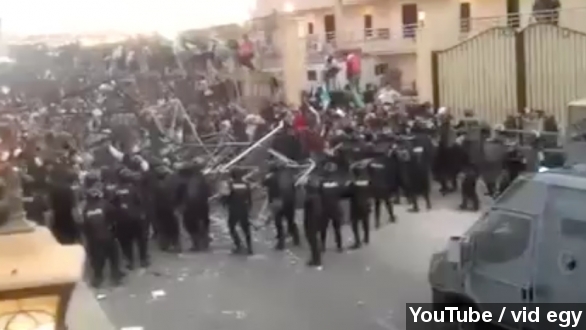 At least 25 people were killed and dozens of others injured Sunday after a violent clash between police and soccer fans outside a stadium in Egypt.

The death toll varied across reports and is expected to climb. Most outlets say at least 25 people died, but others have the number as high as 40.

According to the state-run media outlet Al-Ahram, one medical source said, "They died of suffocation and stampede after being tear-gassed."

It's still unclear what triggered the violence. The Egyptian Interior Ministry says one group of hardcore Zamalek fans, known as the Ultras White Knights, barged into the stadium without tickets.

The Ultras White Knights disagree and say the violence erupted after police fired tear-gas into a packed area near the only gate they were allowed to use to get into the stadium. The group called it a "massacre." (Video via Facebook / Mostafa Aguero)

Crowd control at soccer matches has been an ongoing problem for Egypt's Premier League. The country had previously banned fans from coming to games for the past three years, though the policy has loosened since. (Video via YouTube / UWKmedia)

For Sunday's game, the Egyptian government restricted how many tickets were made available to the public. Zamalek fans only had access to 5,000 tickets. The stadium has a capacity to hold 30,000.

The restrictions on attendance stems from a soccer match in 2012 when 74 people were killed after fans stormed the field, set fires and faced off with security forces in the Egyptian city of Port Said. (Video via RT, Egyptian State-Run Media)

The Guardian says Sunday's incident marks Egypt's "third football disaster since [the] 2011 revolution," with "at least a dozen mass killings" since that time overall.