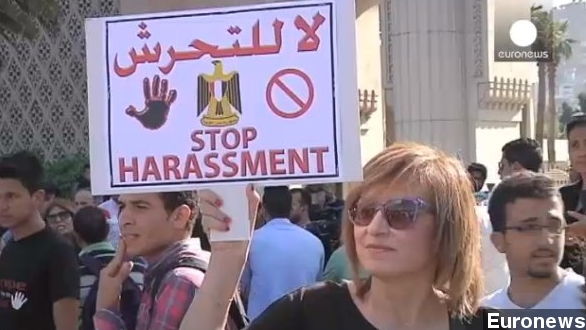 The Egyptian government is sending 13 men to trial in connection with that attack and two other attacks, all of which happened in the square.

GlobalPost reports the men, including one minor, "are charged with abduction, forcible sexual assault, attempted rape and attempted murder.​" ​

Those charges come as part of a government push to cut down on Egypt's widespread sexual violence.

And it's a steep hill to climb, as Al Jazeera reports incidents of sexual harassment have only increased since the ouster of long-time president Hosni Mubarak in 2011.

"It's a problem that we have to face on a daily basis, and it's really frustrating the fact that honestly people or men these kind of harassers get away with no kind of punishment from the government."

The announcement of the charges come a day after the government of President Abdel Fattah el-Sissi asked YouTube to take down the video of the latest assault, citing the wishes of the victim.

It's still unclear when the men will go to trial, but the charges carry a maximum sentence of life imprisonment