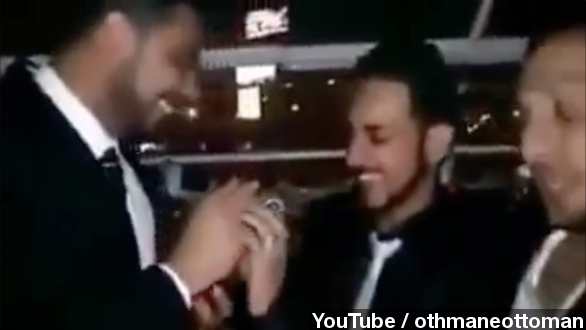 SMS
Egypt Jails Eight Men Over 'Gay Wedding' Video
By Matt Picht
By Matt Picht
November 1, 2014
Eight Egyptian men have been sentenced to three years in jail for "debauchery" after appearing in a video of an alleged gay wedding ceremony.
SHOW TRANSCRIPT

Eight Egyptian men have been sentenced to three years in jail for appearing in an online video which supposedly showed a gay wedding ceremony.

The men were arrested in September after this video, which shows two men exchanging rings and kissing during a boat party on the Nile, went viral. The defendants denied being gay and argued the video has been misrepresented.

Homosexuality has always been a taboo practice in Egypt, but multiple sites have noted an increase in anti-gay arrests since Egyptian President Abdel Fattah el-Sisi wrested power from the Muslim Brotherhood. Activists estimate 85 people have been detained and accused of being gay over the past year.

One BBC analyst suggests Sisi is cracking down on Egypt's gay community to shore up conservative support for his administration.

"He, as you know, was instrumental in removing the Islamists from power. And perhaps he wants to show that he's just as conservative as they are. ... But also, it's a time-honored way for the authorities in Egypt to distract attention from other problems."

The defendants in Saturday's trial also face three years of probation in addition to their jail time. They can appeal the verdict.