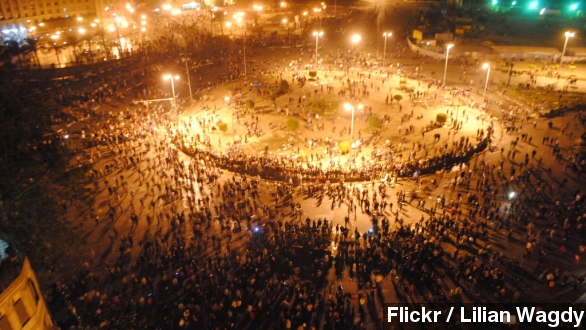 After disturbing footage of a sexual assault in Egypt's Tahrir Square went viral on YouTube this week, the country is now asking the website to take the graphic video down.

"This video posted on social media, appears to show a woman naked with blood covering parts of her body. Police struggle to escort her out of Cairo's Tahrir Square." (Via Al Jazeera)

The BBC reports a spokesperson for newly-elected President Abdul Fattah el-Sissi said in a statement Thursday the request to remove the blurry cell phone video came from the Egyptian embassy in Washington.

The spokesperson also said el-Sissi went to the hospital to visit the 19-year-old woman who was attacked in the video and apologize. It was then that she asked the president to have the footage taken down. (Via YouTube / Marwan Arafah)

YouTube has removed copies of the video in which the woman can be identified. But the site is allowing versions with her face blurred out to remain online.

This attack and others that took place during recent celebrations for el-Sissi's inauguration have caused an uproar around the world. (Via Twitter)

Before the disturbing footage went viral, Egypt approved a new law which makes sexual assault a crime — a first for the country. (Via CNN)

The New York Times reports el-Sissi pledged during his campaign to "restore the sense of shame" that he says once prevented sexual assaults or harassment like this.

But critics are concerned the government won't be able to deliver.

The Guardian notes, when el-Sissi was a top army general, he supported the practice of forced virginity tests on female detainees.

According to a United Nations report from last year, 99.3 percent of Egyptian women said they have experienced some form of sexual harassment in their lifetime.

​And the issue has worsened since the revolution that toppled long-time president Hosni Mubarak in 2011, with women being regularly assaulted during rallies in and around Tahrir Square. (Via Flickr / Lilian Wagdy)

But at least some action has been taken against the offenders in recent attacks. Al Arabiya reports police arrested seven men in connection with assaults which made headlines all week long.

As of early Saturday, Google, which owns YouTube, had yet to comment on Egypt's request to have the graphic video removed from the site.