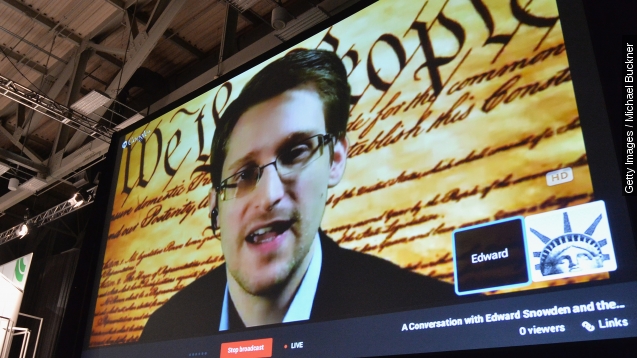 His first tweet was somewhat of a rip-off of a Verizon slogan.

"Can you hear me now?" the actor says in a Verizon commercial.

But we get what he was going for. (Video via Verizon)

Up until this point, Snowden has been a fairly elusive source. Even now he's in Moscow, so we've only seen him or heard him through interviews, videos and even robots. So yes, we can hear you now. (Video via TED)

Snowden has been present on Twitter only in our thoughts, often represented by #Snowden. But in a Friday interview with Neil deGrasse Tyson, Snowden got a little nudge to join the network.

"I tried to find you on Twitter and I couldn't. What's your handle?," Tyson asked.

"Thank you! Thank you! But still, you kind of need a Twitter handle. So like, @Snowden maybe?"

And so the @Snowden account was born — well — that is after Twitter took the handle away from a user who hadn't been active for roughly three years.

Knowing how Snowden feels about privacy, the jump onto a social site is kind of a big deal. He didn't go to competing sites, like Facebook for instance, he went to Twitter. (Video via Amnesty International)

And Snowden's the kind of guy that does his homework first. So it's probably safe to assume that if you're on the site, your security isn't being compromised — at least not by Twitter. (Video via Harvard Law School)

It's also worth noting that even though Snowden snagged more than 656,000 followers, he's only following one account: @NSAGov.