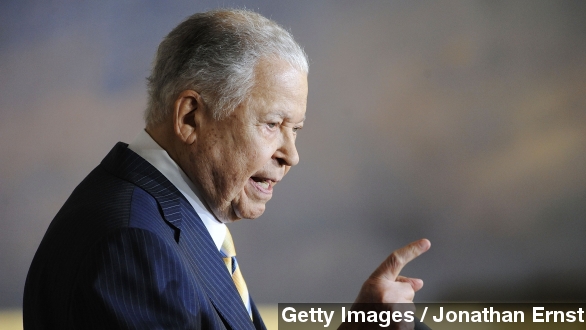 Edward W. Brooke, the former U.S. senator from Massachusetts, died at his home in Florida Saturday at age 95.

Brooke was elected to the U.S. Senate in 1966 — the first African-American elected since Reconstruction. Since his departure from the Senate in the ‘70s, there have been only six other black senators, including President Obama, Cory Booker and South Carolina’s Tim Scott.

Brooke served in World War II before beginning his career in politics. He was the first African-American elected as attorney general in any state before going on to serve in the U.S. Senate as a Republican, falling in with the party’s liberal wing aligned with Nelson Rockefeller.

He later explained he felt a loyalty to the party after winning the nomination during unsuccessful bids for a seat in the Massachusetts legislature. He believed the GOP was the party of progress in Massachusetts.

“It was the Republican Party that desegregated the National Guard. It was the party, I believe, that worked more progressive than the Democratic party,” Brooke said.

Judson Jeffries, an African-American studies professor at Ohio State, described Brooke as a man who didn’t play up race to get elected. Jeffries wrote Brooke wanted to be seen as a candidate who just so happened to be black.

“I’m asking you to vote for me because you believe I have the qualifications, the intellect, the work ethic — which I always threw in,” Brooke said.

The Washington Post writes Brooke strived to show independence as a senator. He went toe-to-toe with the NAACP but was also one of the first Senate Republicans to call for President Nixon’s resignation during the Watergate scandal.

Upon news of Brooke’s death, Massachusetts Governor-elect Charlie Baker described him as “a war hero, a champion of equal rights for all, and an example that barriers can be broken.”

Brooke is survived by his wife and three children.