Department Of Education And Secretary DeVos Held In Civil Contempt 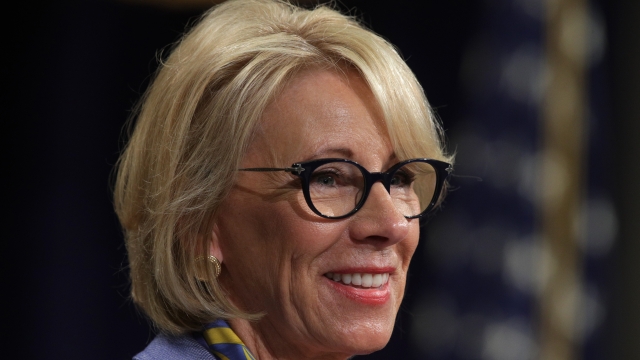 A federal judge held Education Secretary Betsy DeVos and the Department of Education in civil contempt Thursday and ordered them to pay $100,000 in damages to students who took out loans for a defunct for-profit college.

The decision came in response to the Department of Education violating a previous court order to stop collecting the loans in 2018. The college in question is the now-defunct Corinthian Colleges.

Earlier this year, the department admitted that more than 16,000 borrowers were wrongly informed that they owed a payment on their debt following the court order to stop collecting the loans.

On Thursday, U.S. Magistrate Judge Sallie Kim wrote in her order that "the evidence shows only minimal efforts to comply with the preliminary injunction." She added that there was "no question that defendants violations harmed individual borrowers."

In a tweet, the Department of Education said, "We're disappointed in the court's ruling. We acknowledged that servicers made unacceptable mistakes. Secretary Betsy DeVos directed FAFSA to take immediate action to help every impacted borrower. As of today, FAFSA has taken the actions needed to make every impacted borrower whole."

This court decision marks the latest chapter in DeVos' ongoing legal battles. DeVos and the Department of Education have already been sued over the high rejection rates in a debt forgiveness program.