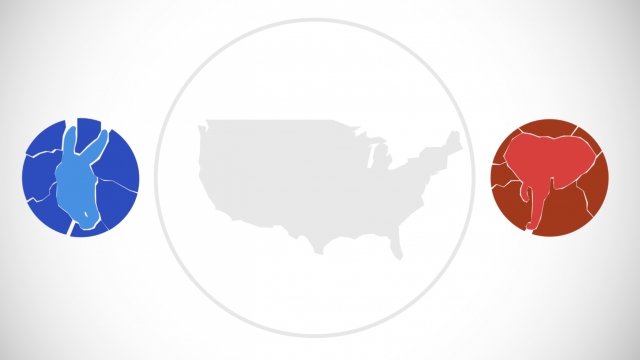 SMS
The Composition Of Our Political Parties Has Never Been Starker
By Eugene Daniels
By Eugene Daniels
March 29, 2018
For instance, 70 percent of millennial women either affiliate with or lean toward the Democratic Party.
SHOW TRANSCRIPT

Doherty is the director of political research at the Pew Research Center. They just released a report that looks at our political polarization in registered voters and how it's changing.

"In the attitudes we see and political values of voters that they grow further apart, well, the composition of the voters, the actual base of each party is growing further apart," Doherty said.

Doherty's talking about the fact that they found that our two major parties have never been composed differently. Especially when it comes to gender, race, educational attainment and age groups.

There's a very small sliver of the U.S. population that is actually independent. So when you add in "leaners," you get 50 percent of registered voters going for Dems and 42 percent for the GOP.

"More people do call themselves political independents than did in the past. In part because they're dissatisfied with both of the major political parties. But when you ask them a follow up question, 'Which party they lean towards,' you see this 90 percent-plus saying they lean to one party or another," Doherty said. 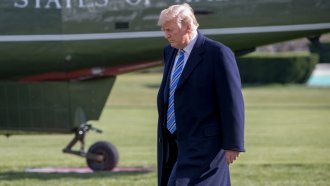 Trump Wants A Line-Item Veto. The Constitution Could Get In His Way.

"Men [are] pretty flat at 44 percent Democrat, so that 12-point gender gap; it's among the widest we've seen in the last 25 years," Doherty said.

The GOP used to really be composed of people who had at least four years of college education, but over the years that group has been moving further and further toward Dems. And now 58 percent of those voters trend blue.

"But when you talk about people who either have a high school degree or lower, they are increasingly going to the Republican Party. This is now the base of the Republican Party. 25 years ago, white voters without a college degree made up a majority of Democratic voters, now they make up a third of Democratic voters. That's quite a big shift over the course of a generation-plus," Doherty said.

"Millennial men, not so much. I mean, they're still the most Democratic generation, but only 49 percent or so identity or lean toward the Democratic Party. There's a bigger gender gap in party ID among millennials than among older generations," Doherty said.

What really matters with all of this new information is should either party be celebrating or really worried? The answer — like our politics — is, well, split.

"For the Democrats, this broader base of voters, but many of them young, many of them less likely to turn out. Given that, may favor the Republicans in the current moment, whereas the Democrats may have an advantage going forward given the age profile of the two parties," Doherty said.