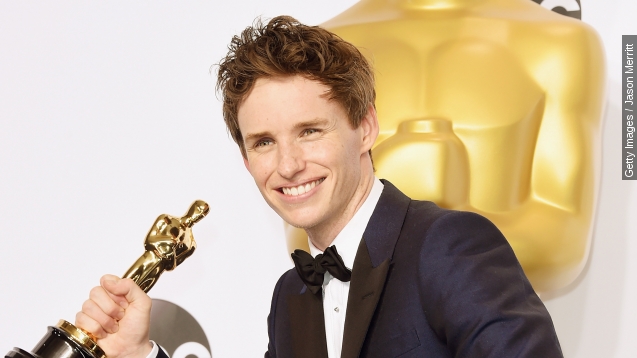 Eddie Redmayne is on top of the wizard world.

Warner Bros. announced Monday the Oscar-winning star will join the "Harry Potter" franchise as magizoologist Newt Scamander in "Fantastic Beasts and Where to Find Them."

If you're unfamiliar with this aspect of the 'Harry Potter' world, Scamander wrote a magizoology book by the same title, and it's a required read for all first-year Hogwarts students.

The book was referenced and owned by Harry Potter in "Harry Potter and the Sorcerer's Stone." It was written 70 years before Potter's story begins, making it an extension of the series.

This film is ramping up to be a major blockbuster. This will be author J.K. Rowling's debut as a screenwriter. And David Yates, who directed the final four Potter movies, has signed on as well. David Heyman, the producer for all eight wizard movies, will produce this latest film.

This has already been an incredible year for Redmayne.

"My name is Stephen Hawking," said Redmayne in the film "The Theory of Everything."

His portrayal of Stephen Hawking in "The Theory of Everything" earned him critical acclaim and approval — by the theoretical physicist himself.

Redmayne won seven awards, including an Academy Award, and the movie got an astounding 99 nominations throughout the award season.

He told AfterBuzz TV at the 2015 Palm Springs International Film Festival the most difficult part of playing Hawking was filming the stages of Lou Gehrig's disease out of order:

Even though Redmayne said playing Hawking was "tricky," he's calling his next role his "most challenging" character, according to Daily Mail.

He will star in the real-life story "The Danish Girl," where he will play the world's first-known gender reassignment patient, Einar Wegener.

The movie, out in November, reunites Redmayne with his "Les Miserables" director, Tom Hooper.

The Academy Award winner is already expected to win his second Oscar for his performance in "The Danish Girl."

"Fantastic Beasts and Where to Find Them," the first in a trilogy, is currently in pre-production and will hit theaters Nov. 18, 2016.