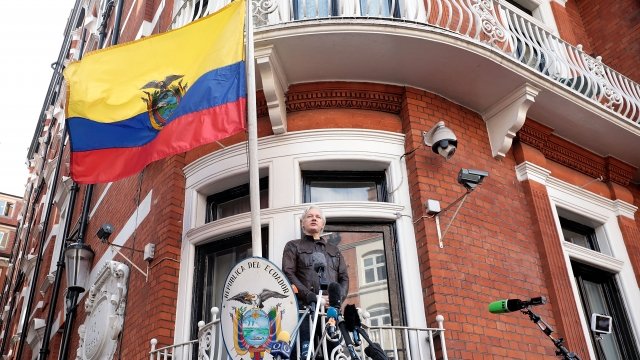 SMS
Ecuador Removes Extra Security At Embassy Where Julian Assange Lives
By Ethan Weston
By Ethan Weston
May 18, 2018
Assange has been staying in the embassy since 2012, when Ecuador granted him asylum.
SHOW TRANSCRIPT

Ecuador's president has ordered the removal of extra security at the country's London embassy — where WikiLeaks founder Julian Assange has been since 2012.

The decision comes after The Guardian reported the country had spent at least $5 million on a secret intelligence program and extra security for the embassy.

Ecuador granted Assange asylum in 2012. He was avoiding extradition to Sweden over sexual assault allegations, which he denies. That investigation has been dropped, but the U.K. is still seeking to arrest Assange over a breach of bail conditions.

In March, Ecuador's government cut off Assange's internet after he made a number of political comments on Twitter.