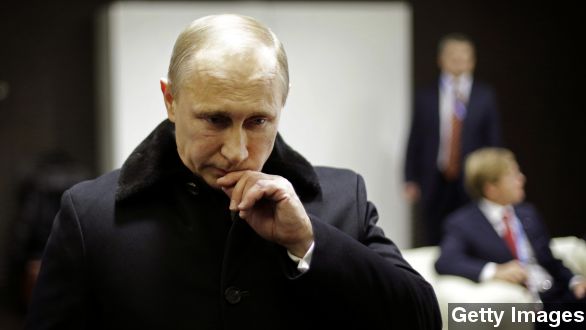 SMS
Economic Crash Puts Putin's 'New Russia' Dream On Hold
By Zach Toombs
By Zach Toombs
December 27, 2014
Vladimir Putin had dreamt of building a "New Russia" that included parts of Ukraine. But bogged down rebels and a tanking ruble could end that.
SHOW TRANSCRIPT

About 4,700 people have been killed in fighting between Ukraine and Russian-backed militants — Euronews says a quarter of those deaths have come after a cease-fire agreement in September.

Despite gains by Ukraine's armed forces, Russian militants still control Donetsk and Luhansk, major cities in the country's east. And that's where fighting in recent months has focused. (Image via Google)

Though as we noted Friday, the weekend did bring a positive development: Ukraine's biggest prisoner swap yet. (Video via Al Jazeera)

“As the president and as an ordinary citizen my heart is full of joy," Ukrainian President Petro Poroshenko told newly freed prisoners, filmed by Sky News. "As promised you’ll be able to celebrate New Year with your families and military friends. That’s what we’ve been waiting for so long."

Vladimir Putin had dreamt of restoring Novorossiya, something The Guardian describes as "a historically fictitious pseudo-state." It would basically encompass Russian speaking peoples in the east and south of Ukraine. But now Putin has other concerns.

Russia's ruble crisis and an economic crash brought on by illegal maneuvering in Ukraine has put dreams of a "New Russia" on hold.

And actually, Putin's attempt to swallow Ukraine has only pushed it further away. In 2012, only one in five Ukrainians supported joining NATO. This summer, that had support from about half of Ukrainians surveyed. And Tuesday, Ukraine voted away its neutral status on NATO.