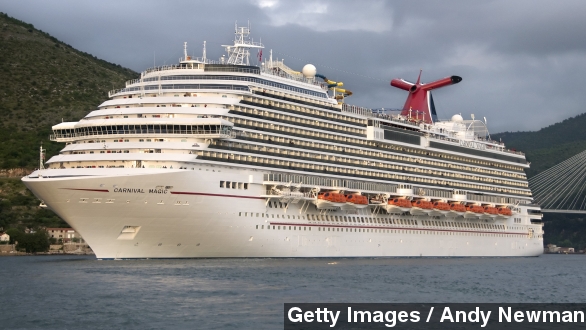 By Matt Picht
October 17, 2014
A cruise ship was turned away from Mexico after a possible Ebola case on board was revealed.
SHOW TRANSCRIPT

Today's Ebola scare takes place on the high seas for a change — a Carnival cruise ship was turned away from Cozumel, Mexico, after identifying a potential Ebola risk on board.

The cruise ship is carrying a Texas health care worker who handled the lab samples of Thomas Duncan, the first person to be diagnosed with Ebola in the U.S. The worker has isolated herself on board the ship, and the vessel is returning to Galveston, Texas after being denied entry by Mexican authorities.

Fortunately, according to the U.S. State Department the isolated traveler has shown no symptoms in the 19 days since she handled the samples. Ebola has an incubation period of 21 days.

A KMGH reporter on board the ship says the passengers have kept relatively calm.

KMGH REPORTER ERIC LUPHER: "I wouldn't say there's any panic going on on the boat, but at the same time what are you going to do, jump off the boat? There's nothing you can do. I think everyone's just kind of talking about it and waiting to get home, now."

But even if — as is likely the case —  this scare does turn out to be a false alarm, it is raising some questions about the Ebola response. Well, just one question, really.

WOLF BLITZER ON CNN: "Some are already saying, why was she on this ship to begin with?"

ANDREA MITCHELL ON MSNBC: "People are raising questions about why she was even permitted to travel."

GRETCHEN CARLSON ON FOX NEWS: "A lot of people are asking, why was she allowed to travel in the first place on that ship?"

At the time the worker left Texas, CDC guidelines only required people who came in contact with Duncan to self-monitor their condition — they were free to travel if they didn't report any Ebola symptoms. And that's something Texas Governor Rick Perry isn't happy about.

GOV. PERRY VIA KTVT: "It defies common sense from my perspective that has been in close proximity or has treated these patients ... that they would travel out of state, that they would go on a cruise."

Gov. Perry and the state's health agency imposed new, voluntary travel restrictions Friday, asking anyone who helped treat Thomas Duncan to avoid public places and transportation until the 21 day period is up. The order isn't mandatory, but anyone who violates it could face quarantine measures.

Perry's also joined the growing chorus of lawmakers asking President Obama to enact travel bans on countries with severe Ebola outbreaks — an idea both the CDC and the administration have resisted as counterproductive and difficult to enforce.

Two other health care workers who came in contact with Duncan are being treated for Ebola. One of the afflicted workers boarded two flights before being diagnosed; the CDC is currently hunting down and monitoring the passengers of both flights.