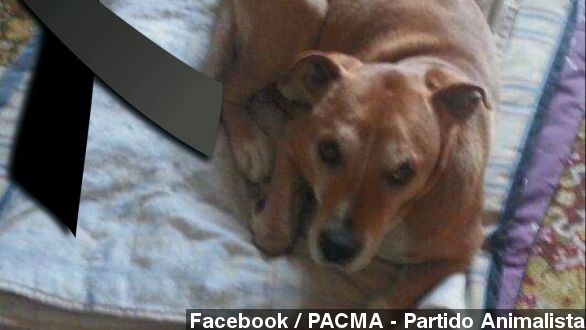 By Christian Bryant
October 8, 2014
Spanish officials killed a dog they thought was infected with Ebola, and some say the concern over the animal was greater than the concern for humans.
SHOW TRANSCRIPT

One of the most popular stories since the Ebola outbreak in West Africa began causing global hysteria centers around a rescue dog named Excalibur.

The dog's owner, Maria Teresa Romero Ramos, is a Spanish nurse and Ebola patient currently being treated in Madrid. The city's regional government announced then followed through Thursday with euthanizing the dog due to fears it could carry the deadly virus.

The announcement itself sent people into an uproar online and in real life. Romero's husband posted a video asking for help saving Excalibur and a Change.org petition calling for the resignation of those who euthanized the dog has gained nearly 400,000 signatures.

By contrast, another petition to fast-track vaccine research for Ebola has gained just over 150,000 signatures.

To be clear, some reports say protestors have it out for Madrid authorities not just because an innocent dog was put down. Spanish people also demonstrated because there was an unclear protocol in handling the dog, so they feel like authorities might have put other people at risk.

But many writers felt the reaction to this dog's death far exceeds responses to any one of the more than 8,000 humans that have been infected or the nearly 4,000 humans who have lost their lives. A headline from the UK's Channel 4 asks, "Who matters?"

At least one columnist from AZCentral.com writes that people caring for the dog aren't exactly overlooking human lives, writing, "We can have it both ways. We can feel empathy and concern for our brothers and sisters battling this terrible disease and also feel bad about a dog."

Commenting on the concern for Excalibur, a Bloomberg writer said, "We've long known that as a species, we lack perspective about the relative value of life, as well as risk." He adds Spanish authorities need to figure out how Ramos went so long without receiving care.

Also today, Vox pointed out one "terrifying" paragraph from The Daily Beast, which describes an allegedly slow response to caring for Romero, who eventually tested positive for Ebola:

"[She called the] hospital several times between September 30 and October 2 when her fever finally hit the 38.6 threshold. Still, it took until October 6 when she had become so deathly ill she was begging for an Ebola test before anyone at the hospital where she worked reportedly reacted."

The article goes on to say that by the time Romero did receive care, she was already showing symptoms of the virus which means she was most likely contagious.

The New York Times cites comments from Spanish health officials who said Wednesday Romero might've mishandled her equipment while caring for a Spanish missionary with Ebola.