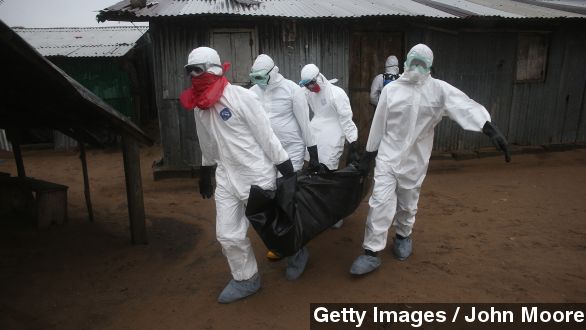 Close to 7,000 have died from Ebola in West Africa since the start of the outbreak, according to the latest numbers from the World Health Organization.

Its most recent reports shows 16,169 cases across Guinea, Liberia and Sierra Leone; and 6,928 deaths.

The WHO attributes the jump to previously unreported deaths, and warns it's probably worse than it looks, thanks to unreliable reporting and limited access to healthcare in some areas. (video via eNCA)

Sierra Leone is especially hard-hit — officials warn it could soon pass Liberia for the most heavily-infected nation in the outbreak. (Video via France 24)

Portions of the country are on lockdown, forcing some students to attend their classes by radio from home now, for example.

But the WHO is still tracking hundreds of new cases a week.

A report in the New York Times shows a frustrated population stuck with slow aid response and a lack of protective gear.

This comes as the U.S. National Institutes of Health and pharmaceutical company GlaxoSmithKline saw successful preliminary trials of an Ebola vaccine for humans.

NIH officials said they hope to start larger-scale trials on the ground in West Africa. (Video via CNN)

Another Canadian trial is underway as well. Study results for that drug’s effectiveness are expected in early 2015, and if it shows promise it, too, will be tested in West Africa. (Video via CBC)