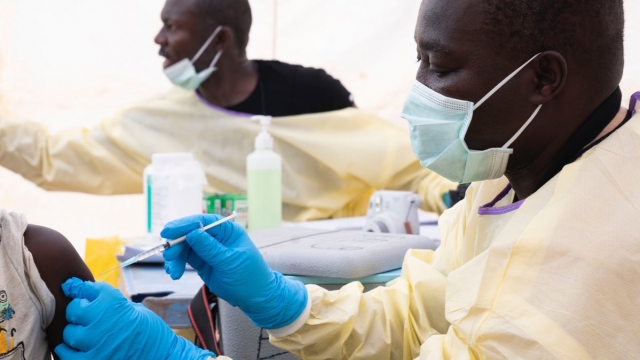 SMS
Congo's Ebola Outbreak Moves Closer To Rwandan Border
By Caitlin Baldwin
By Caitlin Baldwin
July 15, 2019
The World Health Organization says a pastor who rode from Butembo to Goma was infected, and it's identified 60 people who were on his bus.
SHOW TRANSCRIPT

The Ebola outbreak in the Democratic Republic of Congo has spread to a city with more than 2 million people near the Rwandan border.

The World Health Organization says a pastor who traveled to Goma, Congo, from the city of Butembo was infected. The pastor is now at an Ebola treatment center.

"Although this is a very concerning development, it's one that we and the government have expected and prepared for," said the WHO's director general.

A top WHO official told the United Nations on Monday that the organization has identified 60 people who traveled on the same bus as the pastor. He says over half of them have already been vaccinated.

But Ebola responders are facing ongoing violence. The WHO says two responders were murdered in their homes over the weekend, bringing the number of first responder deaths from attacks to seven. The organization says it's also continued to face vaccine mistrust and misinformation.

The WHO says it doesn't expect any further transmission of the disease, but that it will reconvene its Emergency Committee soon.