Ebola Outbreak In Congo Has Killed At Least 19 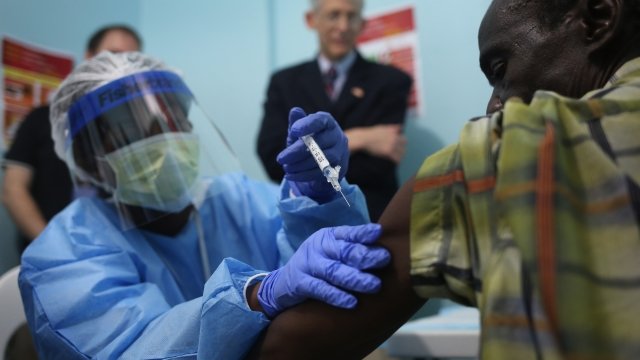 SMS
Ebola Outbreak In Congo Has Killed At Least 19
May 15, 2018
The World Health Organization sent an experimental vaccine to the Democratic Republic of Congo to combat an Ebola outbreak.
SHOW TRANSCRIPT

The Democratic Republic of Congo is dealing with its ninth Ebola outbreak since the virus was discovered there in 1976.

Since April, the World Health Organization says 39 suspected, probable or confirmed cases of Ebola and 19 deaths have been reported in Congo.

To help control the country's latest outbreak, the World Health Organization has shipped it 4,000 doses of an experimental, but reportedly highly-effective, Ebola vaccine.

But WHO officials say delivering the vaccine comes with several challenges, including that it must be stored long-term at a certain temperature. Navigating Congo's tough physical terrain could also be a challenge.

Health officials could begin administering the vaccine by the end of this week.