Ebola Not Found In Those Who Made Contact With U.S. Patient 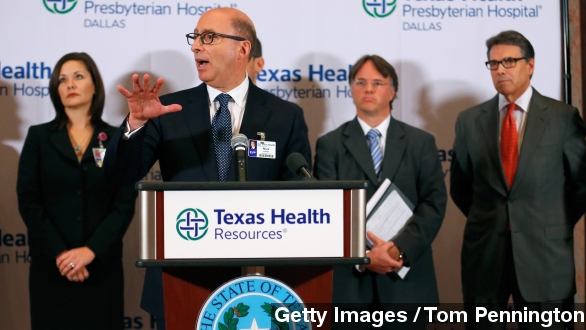 SMS
Ebola Not Found In Those Who Made Contact With U.S. Patient

By Christian Bryant
October 1, 2014
Texas health officials have begun tracking down and monitoring people who came in contact with the Ebola patient. That includes five children.
SHOW TRANSCRIPT

We're now learning more about the Texas Ebola patient — the first diagnosed in the U.S. — and how a possible miscommunication allowed the patient to come in contact with other people.

The Associated Press has identified the patient, but we have chosen not to at this point. He's reportedly a Liberian national who arrived in Dallas to visit family Sept. 20. By the 26th he had developed symptoms and sought care.

Texas Health Resources Executive Vice President Mark Lester said Wednesday a triage nurse performed a screening on the patient, who said he had recently been to Africa. But for whatever reason, that information wasn't passed along to the team evaluating whether to keep him or send him home, and he was released.

Health officials and Texas Gov. Rick Perry said at a press conference the man had possibly been in contact with up to 18 individuals.

RICK PERRY VIA NBC: "We've learned that some school-aged children have been identified as having contact with the patient."

SUPERINTENDENT OF DALLAS SCHOOLS MIKE MILES: "We have the five students that attend four different schools."

Meanwhile, officials from the Centers for Disease Control and Prevention arrived in Dallas and began tracking down anyone else who had contact with the patient. KTVT reports the paramedics who brought the patient to the hospital Sept. 28 are being monitored but have tested negative for Ebola.

Texas Health Presbyterian Hospital, where the patient is being treated, hasn't commented on the specific drugs being used to treat the man. KDFW reports health officials are discussing using experimental drugs, but not the ZMapp drug that was given to earlier patients because it's no longer available.

The patient is in intensive care, but his condition has improved.

This video includes images from the Centers for Disease Control and Prevention and Getty Images.